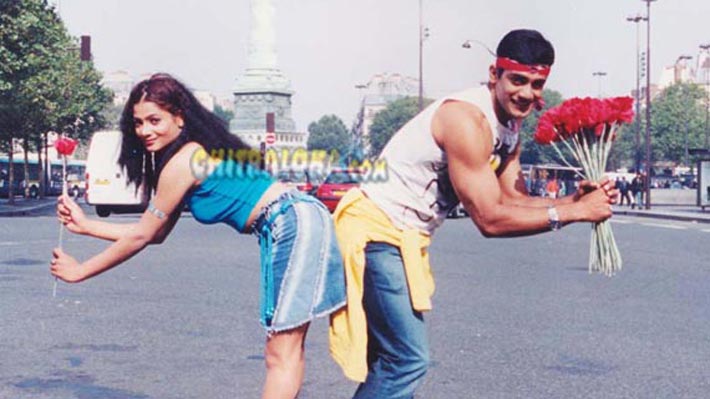 PARIS PRANAYA is a panoramic view of Europe besides being palatable, paradigm, pragmatic and praiseworthy. All because of the passionate and diligent director Nagathihalli Chandrasekhar and his team. The cynosure of all eyes ‘PP’ gives you a splendid glimpse of European countries just for Rs.20 in theatres all over Karnataka. Nagathihalli a shrewd and able director is sure to hit a hat trick. His earlier two films ‘America America’ and ‘Nanna Preethiya Hudugi’ (both shot 80 percent in United States of America) runaway hits have already entered the pages of history.

This time in ‘PP’ taking us to the exotic locations of some of the European countries Nagathihalli mixes right elements and leaves nothing short. The selection of right artistes, technicians and his workaholic wonder is a treat to watch also because of songs, screenplay and dialogues. The ensemble of Indian and Western music has worked out very well although at places it looks like a debate.

From a remote village to Rome to treat the audience and keep the Indian flag atop Nagathihalli deserves full compliments.

We will quickly go to the story contents in the film. H.K.Masthar a disciplined and cultural bent of man of values is not interested in sending his grand daughter Poorvi to Paris to carve a future in music. He agrees by compulsion and Poorvi is seen in Paris with her uncle (Sharat). Very soon Poorvi shows her talent and get a cheeky kiss on her cheek from Krishna a native of Karnataka living with his mother in Paris.

Poorvi and Krishna calling each other as Kothi and Goobe spend lovely time till a plot is hatched by her uncle to get her engaged to 45 years old boss (Harnath Policheli) of his music company in Paris. But the lovely pair Poorvi and Krishna already in deep love and they are forced to elope. Just after this the conversation that takes place from a mock marriage between Poorvi and Krishna is a heckling issue for Krishna as he ask to make it real when it comes to ‘Sex’. Poorvi totally disagree and condemn the attitude of Krishna and thus the friendship that turned love breaks. In an imbalance mood Krishna hits against a tree in his bike and soon he is in the hospital. The half -hearted Poorvi decide to join Krishna at this pitiable juncture but her uncle takes her away.

On the other hand the uncle of Poorvi has some other intentions. In a disgusting mood Poorvi comes back to her village and Krishna also follows her. In the house of Poorvi the intelligent Krishna wins the heart of everyone. Poorvi is not happy with all these developments and her uncle in Paris operates from there to get rid of Krishna. At this stage the mother of Krishna played by Sumalatha makes frantic efforts to save her son and the hidden relationships are unearthed at this juncture. We get to know Poorvi and Krishna are close relatives. From here it is an effort to patch up by Poorvi uncle.

You have some more surprise because in the Vishwa Kannada Sammelana at Detroit the HK Master is to be felicitated and on this day Poorvi and Krishna are supposed to sing and dance. Krishna is missing on the scene and he is hit from a wooden block in the village where he had come to meet Poorvi. To the guess of everyone Krishna comes on the scene and it is curtains down for PP.

Raghu Mukerjee in his debut is the right choice. He has the agile look and he is buxom. He has a very strong future ahead and a slight alteration in his nose he could be a star quickly on Indian screen. Minal has managed well and she has once again her facial outlook is not that convincing. Why the Kannada film industry was not making use of this tall and towering actor Sharat Lohitashva. He is a precise selection for the film. Cell phone Seethalakshmi played by Thara and veteran Sunderraj are once again the right choice. Both have given wonderful results. Sumalatha is apt and Harnath Policherli looks strained. Nagathihalli appearing only at the problems cropping up looks like a guide. In a brief presence Amarnath Gowda shows that he is not scared of the camera and he is at ease. Sudha Belawadi has come out naturally. Veteran Rajesh is still at the ‘Beluvalada Madilalli’ style. He is too dramatic. The dubbing for Minal reminds exactly the dubbing done to heroine of ‘Nanna Preethiya Hudugi’.

This is not only a visual treat but musically too. Thanks Nagathihalli for bringing awareness on some of the facts related to Indian and Western ragas.