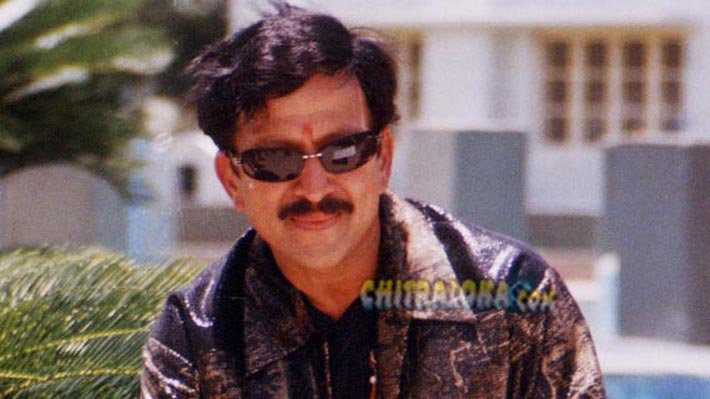 This is not an extraordinary or challenging film for the vivacious Vishnuvardhan. He has done several of this kind of film in the past. What is matchless in him is that he has not copied the original style of style king Rajanikanth in ‘Baasha’ in its Kannada version. A senior actor has pumped in lot of effort and brilliance when it comes to sentiment scenes.

Nanjunda (Vishnuvardhan) is a reformed man living with his mother brother and two sisters. He is an auto driver and a Samaritan. He can donate the needy and the poor bundles of currency notes. He gets medical seat to his sister, conducts marriage to another sister and also helps his brother in becoming an inspector. All this because of the promise he had made to his friend’s father. Such a cool hearted, mild mannered and sahana moorthy is forced to come back to his past moods and temper because of disgruntled elements. In the pre interval powerful action scene Nanjunda rips off the bones of the goonda elements. A dozen goondas are admitted to the hospital. Nanjunda knows where the blow should be given so that they cannot get up for a few days. Nanjunda’s brother brings the message of the position of the goondas and then opens up the flash back.

Nanjunda alias Jayasimha is a robin hood of a different kind only on compulsion. His dear friend inspector was brutally murdered by Mark Anthony and gang for not budging to evacuate the poor people in the colony. On seeing the fate of his dear friend Jayasimha goes on a mission to loot the affluent and aristocratic people in the society in the big bad of Bombay. His only target is Mark Anthony. Jayasimha wants peace but Anthony wants to crown himself by eradicating Jayasimha. Anthony finally falls to the plot of Jayasimha but before this Jayasimha’s father is murdered by Anthony. At this juncture Jayasimha promises his father that he would not live in Mumbai and lead a reformed life in Bangalore. Anthony serving the jail term bounces back once again and on the other hand inspector in the house suspects Nanjunda.  It is stage set for climax.

The image building of Vishnuvardhan is excellent in this film. Director Naganna has been very careful. In the first half there is slight shade of ‘Yajamana’. When the second half opens up it is different for the Kannada audience. The preaching Vishnuji makes in the film on woman, on the luxury in life and his dialogue style and acting caliber are the redeeming features.

Kalyan’s lyrical strength in tune with Vishnu’s image scores thunderous applause in the theatre. Cauveryge Kaibaleya thodisi…, Vardhana Vishnuvardhan…., Annayya thammayya received maximum applaud in the 4.30 pm show at Kalpana theatre on the release day. Yet another notable strength in the film is the graphic works. From an engulfed fire a lion forming and from that Vishnuvardhan taking shape on the screen, Vishnuvardhan in a backdrop of splendid fireworks that later transform as flowers and take the shape of Karnataka map received the nonstop whistle and claps on the first day.

Priyanka looks pretty and daring when it comes to costumes. She feels free with less costume on her. Ramesh Bhat as the right hand man of Vishnu has provided admirable support.

‘KOTIGOBBA’ is not only for fans. It is also for the family and friends. A well made action extravaganza.