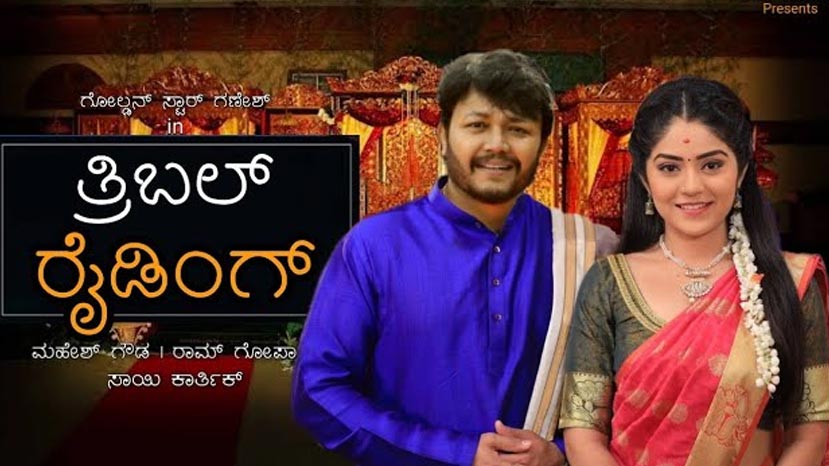 Laughter is the best medicine

Improbable situations, unbelievable incidents, incredible circumstances and fanciful ideas combine to form Tribble Riding, a fun-filled, comedy-packed film, made just for laughs. It may not set standards for entertainment but is a good time pass film that focuses on delivering value for money and succeeds quite well in doing so.

For far-fetched starters, the three leading ladies of the film are named Ramya, Rakshita and Radhika! These are the names of the three popular heroines of Sandalwood from the recent past. The love interest of Rakshita in the film is ‘Prem’ and that of Ramya is ‘Rahul.’ Now you get the drift of director Mahesh’s intentions.

The film tries every trick in the trade book to eke out laughs. From the sophisticated to the crudest methods, these keep tumbling out of the director’s head. A ‘doctor’ who needs Google to treat his patients to a comedian who loses his eyes to prevent him from knowing the truth, the unlikely scenarios tickle the funny bone. All these are required to make the basic plot a little more believable. No prizes for guessing that one though. Our hero has to romance three girls in two and a half hours and at the end of it all of them must be forcing him to marry them. Again there are no surprises that he will achieve his end of the bargain. But how the director takes the audience along this journey matters most.

The narrative in most parts is like the scene where Ganesh is being chased by Sharat Lohitashva, Shobraj and Ravishankar. One has a reason, one is confused and the third one does not know why he is running! As mentioned earlier, this is a film made just for laughs. If you are game for a good time pass film and don’t want to waste too much computing power of your grey mass, this is the film you should be heading for. There are no pretensions about this film. The title itself has revealed what is to be expected and that is what the director manages to deliver.

The film is studded with a few good songs, lots of colourful images, effortless performances by Ganesh and most of the cast. It does not require too much thinking and lets you take the ride in leisure. Happy riding.