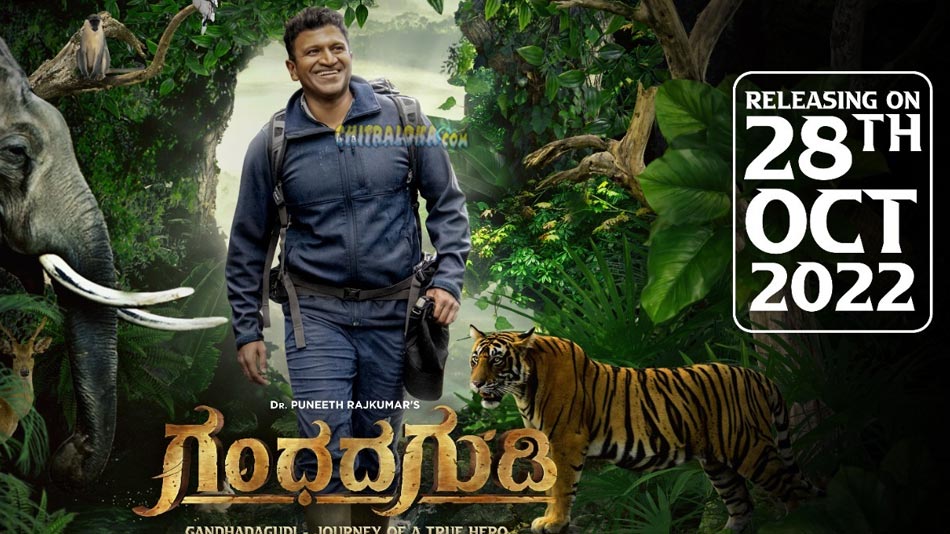 For most people watching Gandhadagudi, this will be their first documentary experience in a theatre. That is the biggest gift Puneeth Rajkumar has left the Kannada film industry with. The enthusiasm, love and cheering of the audience on the first day were all reserved for him and rightly so. This documentary and the reception for it pull at the heart’s strings on what could have been. What new possibilities in movies would he have explored? This is the real Puneeth Rajkumar on screen without his ‘Powerstar’ image. This was his tribute to Karnataka and which paradoxically has become a tribute to him.

This documentary is a journey across the rich bio-diverse world of Karnataka through the eyes of Puneeth. His journey along with director Amoghavarsha, who made Wild Karnataka, the documentary much applauded earlier, takes us through the rich landscapes of the State. It introduces us to the famous as well as less explored natural wonders. It is not just the journey of the two that makes up the documentar. It also has a lively narrative that mixes anecdotes of people living there, foresters guarding these natural treasures and not least, the wildlife that makes it their home.

We get to watch Puneeth talk about his experiences, his fears and the way this journey changes his perceptions. We see the world through his curious eyes and feel so sad when he says how he will carry these memories and experiences for the rest of his life. We get to see first-hand the real person behind the superstar personality. As much as this documentary is an exploration of Karnataka’s wild side, it is also an exploration of Puneeth’s true persona. The film captures Karnataka’s forests and Puneeth’s life in the same frames.

Special mention should be made of the camerawork by Pratheek Shetty and the team that went to great lengths to capture this landmark visual treat. The other highlight is B Ajaneesh Loknath’s background score. It is pure magic.

Feature films are not the only motion pictures that theatres can depend on forever. We already see them screening cricket matches. A few Hollywood documentary films have already made the cut. Puneeth had embarked on something very special. A big success for Gandhadagudi could open up a vast new avenue for filmmakers as well as artistes.