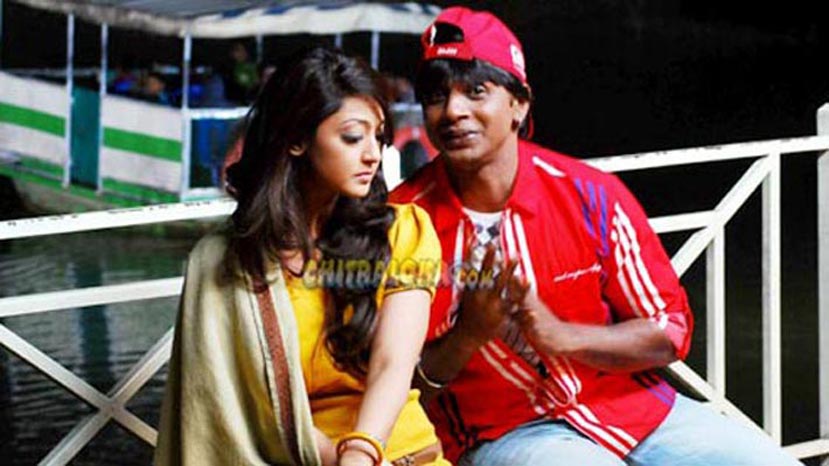 Prolific producer K Manju's another long-pending film has hit the screen this week. Except for the name and banners with his photo, this film has nothing to do with the Tamil superstar. This is also the second outing for director Pradeep Raj who gave a hit with Kiraataka earlier. He is also credited with the story and screenplay of Rajini Kantha.

Rajini Kantha has an interesting plot line written by Pradeep Raj. It is truly brilliant. However, a lot of the meat added to the story is routine and seen in many films before. However, the twists and an gut-wrenching climax makes up for most of the smaller lapses. This film will surely rank high among Duniya Vijay's films. The right mix of a love story, mother-son and brotherly sentiment is present.

The story revolves around Rajini and Kantha, two identical siblings and their single mother who is a school teacher. Elder brother Rajini has a cleft on his upper lip and has trouble speaking properly. His mother spends all her earnings on treating Rajini's physical deformity. Kantha therefore is neglected and develops a sense of hatred for his brother. He is always upset with he feels is his mother's step-motherly treatment towards him. Even when they grow up, this sense prevails. From providing the elder brother with an egg for lunch which is denied to the other brother and a jacket for winter, this discrimination is projected. However, Kantha has his own way of getting what he wants. He steals his brother's poems and impresses and wins over the girl (Aindrita Ray as Priya) both of them are in love with.

Things take a drastic turn when Kantha leaves college and joins a gang of thugs to make money. This is despised by both his mother and brother, but Kantha does not care. However, he harbors deep love for both of them. When he finally leaves the gang to fulfill the wish of his family, the burden of crime returns to haunt him. The climax is exceptional and puts the entire film into a pattern.

The highlights of the film include Vijay's good performance in the dual role. He manages to play the two brothers as two different characters; from the looks to the voice and behaviour. Aindrita provides the eye candy.  Bullet Prakash gets a character of a lifetime and manages to utilise it to the fullest. Arjun Janya has created a couple of good tracks. Giri's cinematography is also a plus point for Rajini Kantha. What is wrong with the movie are situations and incidents that are not part of the main story. They are too ordinary like the comedy, stealing poems of other characters etc. It is a good film if you discount some of the blood and heavy fighting. Vijay's fans should be over the top.