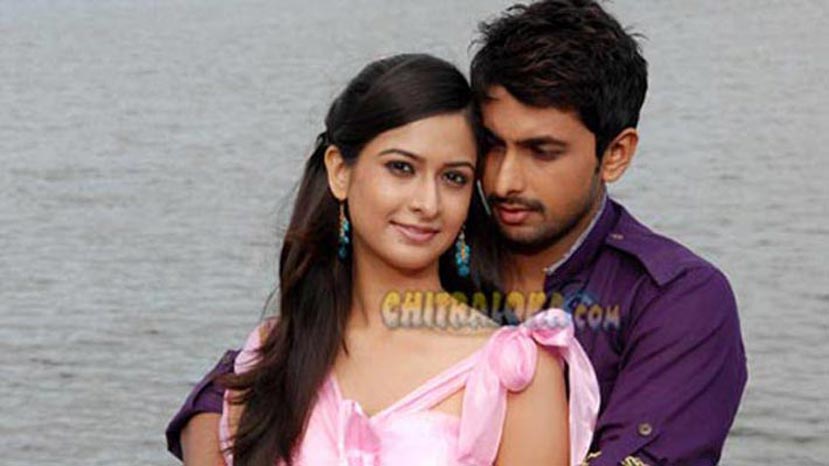 Surprise after Surprise.  Last week we had youngster Santhosh delivering a moving film "Gombegala Love' which was marked by excellent writing and direction with neat performances from youngsters.  Just a week has passed and passionate film buffs are still savouring the high points of  "Pade Pade'.  With in a week comes "Pade Pade'  direced by Nagaraj Peenya which is certainly cut about the rest of the movies.  It is certainly the best of the three movies released this week.  Director Nagaraj Peenya has showcased his talents in ample measure and proves that you have to watch him for future projects.  Well known producers should also try to tap this talent and give him good opportunities for making his way in the film industry.

Pade Pade is not just a triangular love story, but has several layers.  Already the songs of the film had become huge hits. Adding some curiosity value to the audience,  The posters did look quite differently and the two heroines looked really beautiful on screen.   But what makes the film more appealing to the audience is the way Nagaraj has handled the project.

He has not allowed confusions to develop in script and has used all the commercial elements to raise the tempo of the film.  The songs are well picturised and Nagaraj has set the tone for a riveting climax with many twists.  He has written an intelligent, but yet engaging script

It is Tarun's best career performance and he has lived to the requirements of the role.  As usual he looks extremely handsome.  He has to portray different shades for the role which is quite impressive. Kannada girl Akhila impresses with her good looks and performances.  She makes a mark. Mrudula is another heroine who has charms and talent to stay further. Character artists like Veena Sundar and Sankesh Kashi have done very well.

If genuine Kannada film fans are interested to encourage good and quality oriented films,  then Pade Pade is a must watch.  Even for youngsters it is a good watch for its pleasing visuals and glamour quotient of hero Tarun and the two heroines.