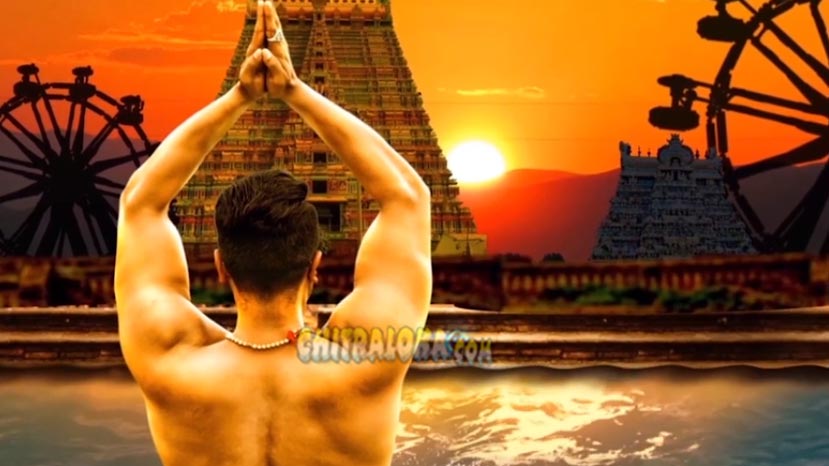 Madhagaja is an action film with equal amounts of sentiments around a family with loads of entertainment in the form of romance, thrills and fights. A wholesome film that entertains both the mass and class audience, it makes for a perfect outing to the theatres.

As the name implies, it is heavy on action. It follows a traditional approach to the story. A child born in the midst of violence is sent away to be brought up in a different environment. But as luck would have it, he has to return to his roots and take up the unfinished job of his father. The director adds much colour and drama to what seems like a simple plot and makes it grand and largely entertaining by fulfilling the needs of both the fans of Sriimurali and the audience who look for wholesome fare.

A long-standing fued between two villages over sharing of a river water results in hundreds of deaths over the years. Jagapati Babu as Bhairava, who heads one of the villages has to constantly fight off the evil forces from the other village who will not stop at destroying both the villages. When Bhairava's wife gives birth to their son, it is in the midst of one such violent encounter. She gives away the child to a mendicant who brings him up in Kashi. Twenty eight years later, the prodigal son returns home and becomes the support to this father who does not yet know his identity.

How the son fulfils the destiny forms the rest of the story told in an action packed melodrama. The drama is between the mother and son. It is an emotional journey that starts from the very first scene and remains the backdrop for the rest of the film. There is also the sentiment between the father and son which develops without them knowing their relationship for the most part. The romance between the lead pair, that actually unfolds in the second half receives lots of catcalls and whistles from the audience. Ashika Ranganath gets to play a meaty role where there is ample scope for her good acting skills and do something different from the regular roles. She bicycles, works in the fields, talks like a sophisticated village girl, even smokes and delivers romantic dialogues.

The second half of the film has much more twists and turns than the first half. The performances by Devayani, Srimurali, Ashika Ranganath and Jagapati Babu keeps the audience hooked to the screen. Sriimurali gets to display not only his fighting skills but his softer side too in the role where he also has to play a son and a loverboy. There is scope for comedy also in the film with Chikkanna and Shivaraj KR Pete providing the required entertainment.

Apart from the actors what works for the film is the brilliant technical aspects of the film. The cinematography captures the images in a very grand manner. The music, especially the BGM has the potential to keep the audience mesmerised. Crisp editing that keeps the story rushing forward and punching dialogues that come out like bullets out of a pistol are the other highlights of the film. Overall, Madhagaja is a total entertainer. The only drawback may be the over the top violence. There is lots of bloodshed which the story demands. Otherwise, this film will entertain audience of all ages.