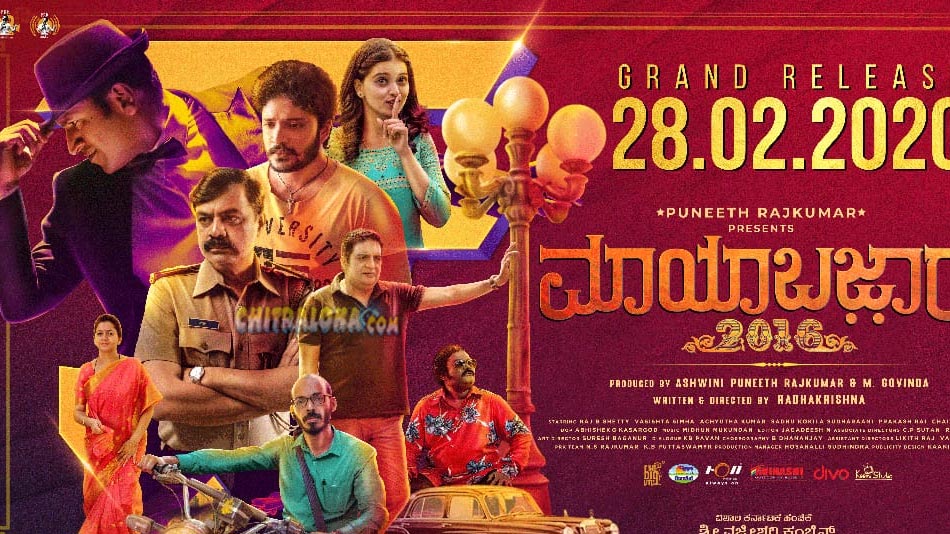 After the success of Kavaludaari, Puneeth Rajkumar productions returns with another sensible entertainer, which revolves around one of most important economic policy decisions of India - Demonetization. Director Radhakrishna Reddy goes on to tell a story on how the situation changes the life of a select few characters in the movie.

Mayabazar 2016 is above all of it and much more presented in a brilliantly written plot involving an honest police officer, a struggling thief and a poor man in true love with a rich girl!

The biggest strength of this magical creation is the content, and with the addition of talented performers such as Raj B Shetty, Prakash Raj, Vashishta N Simha, Chaitra, Achyuth Kumar and Sudharani, the experience of it is near perfection. That's not all, the two plus hours of rollercoaster ride is filled with fun, laughter and great deal of emotions with a pinch of sarcasm, humanity, ethics and belief in the righteousness.

Rightfully titled Mayabazar 2016 for its timeline of demonetization, the film is another technical excellence from PRK Productions, giving the much needed boost to the content oriented venture.

The honest police officer is shattered to know that his wife is suffering from cancer and whereas the lover guy is in a fix after his girl gets pregnant and the thief struggling at the hands of a corrupt officer. Situation brings all three together for a purpose. What is the plan they hatch and how it intervenes is worth every penny.

There is more with the entry of smart and corrupt police officer Prakash Raj and it takes a wild turn with Sadhu Kokila coming into picture as a local corporator who is readying for his next big election to become a legislator.

It is the content and performances and the brilliant screenplay which makes Mayabazar 2016 one of the best in recent times. Do not miss this if you are a fan of content oriented films packed with real good entertainment.