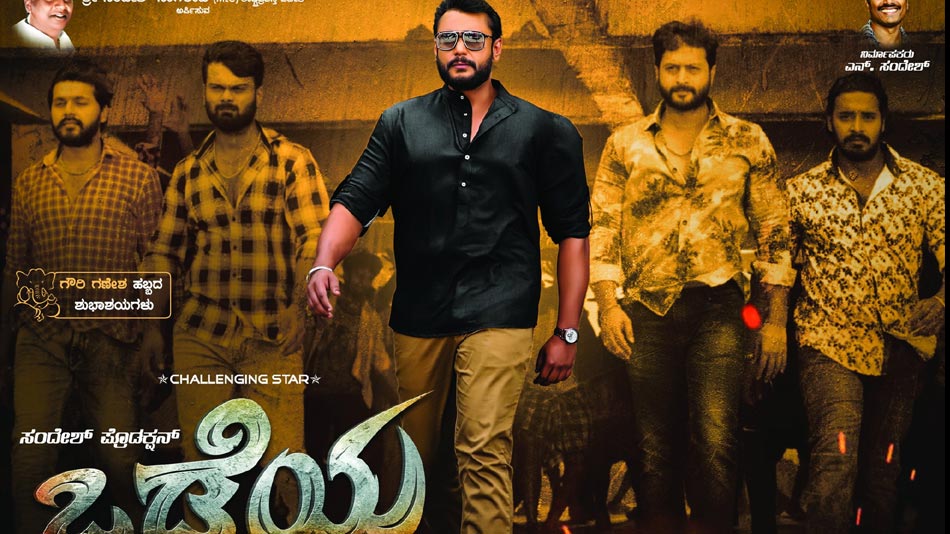 After delivering back-to-back superhits, Challenging Star returns with another promising entertainer - Odeya, which is jam-packed with all the right amount of action, a die hard fan of commercial entertainment looks for. Insofar as Darshan's fans, it is yet another treat after Yajamana and the mythological blockbuster Kurukshetra.

Back in his thunderous on-screen avatar of kicking the bad guys with his impeccable fighting skills, presented stylishly and the blistering dialogues as additional punches makes Odeya a pakka paisa vasool experience running for less than three hours of twisted tale of love, brotherhood, family sentiments and the usual action.

The protagonist, Gajendra is a straightforward man, a likely feature in most of the Darshan's movies, he fights violence with violence to settle disputes and at times helping farmers. A bachelor with a mindset to never marry, for the love for his brothers, changes when he encounters the beautiful girl from his childhood played by Sanah Thimmaiah.

The first half is all about pure action and punching dialogues in setting the characteristics of Gajendra followed with a cute love story and that of the escapades of his brothers in getting him fall in love. The course of action shifts when Gajendra discovers a threat upon his girl and her entire family. A touch of sentiment adds value to the action tale as it moves towards the climax.

Odeya has a huge line of star cast, from Sanah who makes an impressive debut along with the experienced lot starting from Devaraj, Chikkanna, Sharath Lohitashwa, Yeshus Surya, Sadhu Kokila and others

The script is perfect and a tailor-made for a typical challenging star movie, which is totally high of what he is known for in a mass masala entertainer which has something for the family audience too. A win win scenario for all kinds of audience, Darshan fans will definitely cherish Odeya with which the victory run of their favourite star actor further continues, a third in a row in a calendar year.