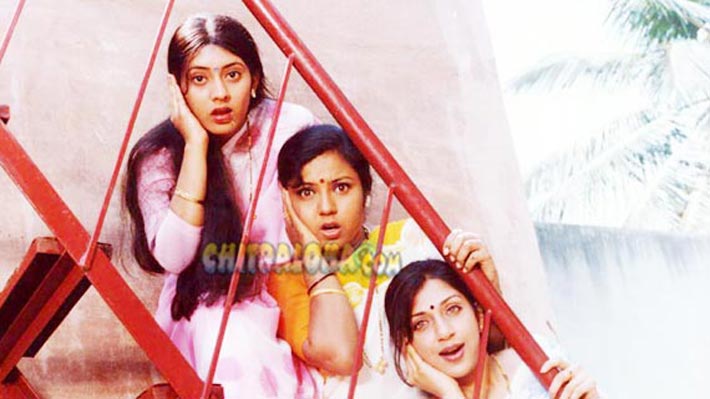 Kodlu Ramakrishna has lifted the subject from a Tamil film ‘Bhama Vijayam’ and Hindi film ‘Teen Bahuraniya’ and he should feel ashamed of claiming credit for the story. For a fresh producer a senior director Kodlu has not shown his brilliance. Then how can one expect new producer to come up in the field. The producer has made available everything to the director but Kodlu has churned out a poor film. You feel sick of his narration. He is still at genesis of film time. The best of the lot of artistes capable of giving wonderful results on the screen have not been used properly. It is less than a mediocre film.

It is a joint family with Vasudeva Rao (Ananthnag) being the Karthru of the house. He has brought up his three songs Suresha, Mahesha and Ramesha as model sons. The respective wives (played by Thara, Chaithali and Damini) finds luxury is more important and they are not bothered the correct way of getting it. The replica of father – Ramakrishna, Gurukiran and Ramkumar are forced to go for loan and obviously the corrupt minds bring in sorrows.

The sons and wives of widower Vasudeva Rao are now traveling in a parallel line of life. So far the sons have not cheated and now they pick up this habit and shock Vasudeva Rao. The Bahus throw up heir hands and sons fails to meet the instalment amount. A peaceful joint family life turns into pieces. The reason behind the trouble to shoot up is because of an entry of film actress Shruthi opposite their house.

The false prestige makes the bahus blind they are helpless when the salagararu (creditors) attack them. So far they are telling every one to make some adjustment even to their own father in law. When it becomes neck deep Vasudevarao walks out of the house and saves the prestige of the house from the amount he used to collect from three sons every month towards the rent he was collecting.

The big tragedy of this film is that you go to the theatres with the intention of watching a comedy film but you get disappointed. The director has used a wrong trick to draw your attention. It is a comedy less film.

Ananthnag throughout the film gives a cool and composed performance. It is from this versatile actor the director could have drawn comedy.  It is nothing new for him. Thara and Chaithali excel in their roles. The music and cinematography are atrocious.