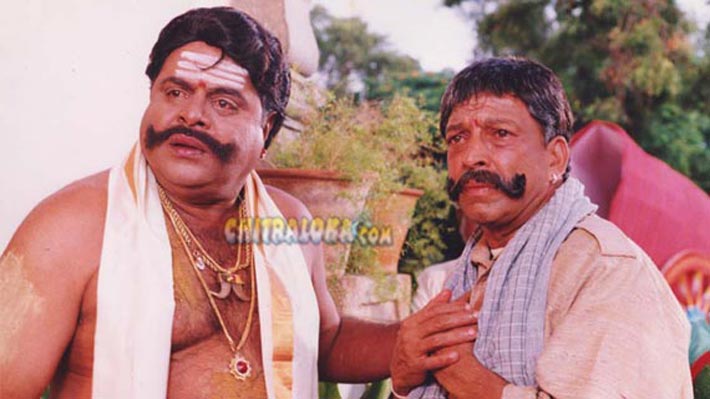 It is a right selection of subject for the audience of Karnataka. What is fantastic firstly is the screenplay of this film. Like any thrillers it holds the attention of audience till the last shot of the film.

The five stalwarts are Rockline Venkatesh the producer, Director D.Rajendra Babu, Music director Hamsalekha and last two but not the least the presence of Vishnuvardhan and Ambarish. It has been as tasty as ‘Panchamrutha’ for the audience. It is undoubtedly the wholesome entertainer for the family. When it is said ‘Panchamrutha’ it is also difficult to say which one is first important. All the five components have worked out superbly.

The destiny gives a test for the thick association. The servant friend takes the onus of the murder for keeping up the prestige of his Wodeyar. He goes to 15 years imprisonment. In the prison the wodeyar gives a promise that he will not divulge to any one what exactly happened to his ardent servant. Back home he kicks out the responsible in the house and all under the impression the prison serving Mutha is the cause.

So all except Wodeyar are waiting to take revenge on Mutha. We have another Mutha look alike Chikkayya (Vishnuvardhan again) doing what his father was supposed to do. The fond daughter of Wodeyar returns from abroad and her first target is Chikkayya. The situation becomes so shabby for Wodeyar that he is not in a position to bring Chikkayya back to the house. Costly mistake No.2 but it is inevitable for Wodeyar as the situations binds him.

As the time rolls and reels pass Mutha comes back. For him his own son is enemy as no one is aware what exactly happened on the marriage hall fifteen years ago. The venom of the kicked out family head by Wodeyar grows stronger with the emergence of Mutha.

Again the stage is set for marriage of Wodeyar’s second daughter (Sanghavi) this time. The father and son (both Vishnuvardhan) fights back bring the glory but pall of gloom sends shock. In the fight Mutha gets a pierce of a weapon in to his stomach and dies. Looking at this fate for his companion Wodeyar turns very emotional and loses his heart.

The real life ardent friends have transformed here as Wodeyar and Servant. Once again the senior Vishnuvardhan is tremendous. Vishnu’s emoting capacity deserves rain of applause. The younger Vishnu also looks ten years younger to his age with lovely-thanks to lovely costume selection by Keerthi Vishnuvardhan – keep up this show for ‘Paapa’.

Rebel Star Ambarish the sitting Member of Parliament has given a power packed performance.  Baap re, he has not forgotten acting. While Vishnu’s role is like a fresh cool air Ambarish’s role is like a fire. But the cool breeze only does a lot of job is a different matter. It is Tennis Krishna as a ‘Mareguli’ very appealing to hearts. Sanghavi has been daring and less in baring.

Mansoor Ali Khan the hill like muscle man looks awkward and does not fit in to the role. For Thara it is been an emotion filled one and she has done it with ease. Senior actress Lakshmi comes and goes as fast as she comes and goes from Chennai to Bangalore in air. Gurudutt finding a job looks pitiable.

The song Chikuvu Chikuvu has been very well choreographed. There are other two tunes from Hamsalekha good in melody and meaning. Das has been consistent once again after ‘Preethse’ for the same producer.