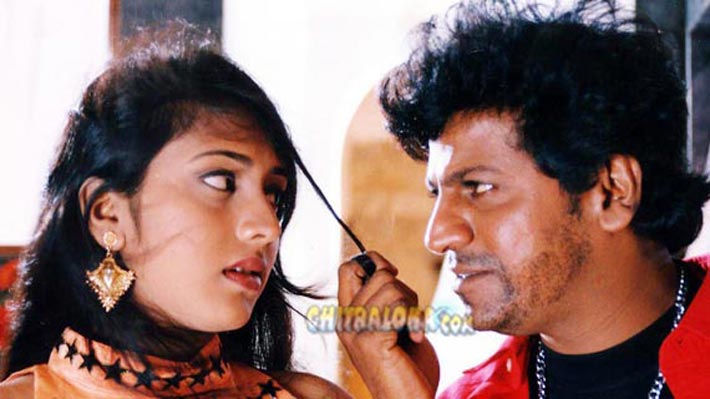 This is a brilliantly made film because of the fantastic performance by Shivrajkumar. Shiv has lived the role and leads the film on his shoulder like an all rounder in a cricket match. He dances, emotes, fights and picks up the right temperament elegently for all his scenes in the film. The only lacunae of this film is that it is a remake of Tamil film ‘Amarkalam’.

The hero Vasu (Shivrajkumar)is a vivacious man but his parents throw him in lurch in his little age. He has a chain in his hand and smokes cigarette in chain for the heartburn he faced in his younger days. For Vasu a hired killer and a hired place in a cinema hall is everything in life.

On the other hand is Mohana (Damini) from the house of police officers. Her father is Police commissioner and uncles are deputy and assistant commissioner. Enters Thulasi (Raghuvaran) to settle the scores of twenty years. He hires Vasu on a payment to meet his ulterior motive. It is discovered that the targeted girl Mohana turns out to be the daughter of Thulasi.

At this stage Mohana falls in love with Vasu. When Vasu finishes his task he is actually in love with Mohana but his boss Thulasi is not interested in this match. Thulasi hires a rowdy Jairaj to finish but in the brutal attacks Vasu turns victorious and finally it is as expected.

What is interesting is the narration and plots fixed at regular intervals to further rake up the interest of the audience. Director Mahender has given a memorable work. The dream song concept and a lengthy breathless song are memorable. It is Shivrajkumar eats away everyone in the film. When the tall and lanky Raghuvaran comes in front of versatile Ananthnag he looks place.

The grace of Ananthnag is more that what Raghuvaran has. Damini gives a good performance. In the comedy department Sharan and Michael Jackson provide fun and also lives up to the needs of the hour with sense.  For the beautiful lyrics of Kalyan there is equal melody from music director Gurukiran.

Forget that this is a remake there are good elements to enjoy.