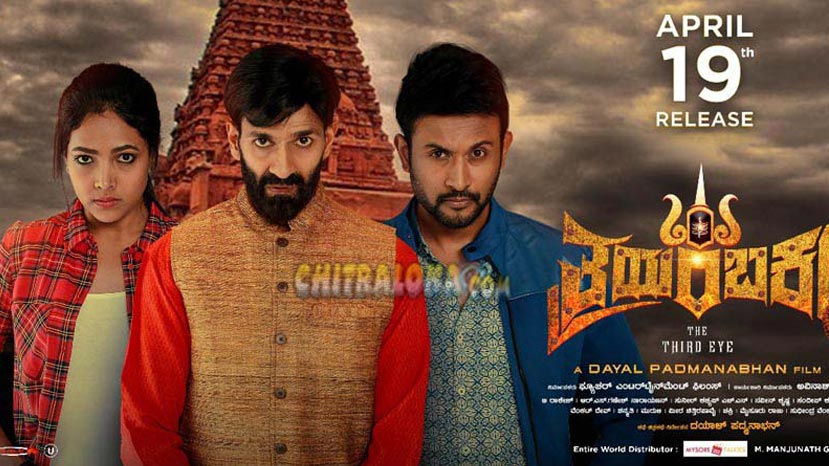 The sensible director Dayal Padmanabhan returns delivering his third venture in less than nine month's time after Aa Karala Ratri and Puta 109. Pegged around a centuries old unique Shivalinga made out of navapashana dating back to Vijayanagara dynasty which has greater medicinal qualities, Thrayambakam revolves around a father's emotional struggle between reality and illustration.

Based on the historical findings over 'navapashana’, its relevance since ancient times and similarly made idols which are found in couple of temples in Tamilnadu, director has attempted a new kind of storytelling attached with thrilling moments.

While the curiosity is held effectively over navapashana and its connection with the dreams and illusions foreseen by the father's character, the significance of it, is revealed in later stages. It is undoubtedly Raghanna's show all the way as a disturbed father and his concern over the safety of his daughter. That apart, Anupama Gowda puts up an impressive act through her lively and energetic performance, one as a journalist and another as an archeological officer!

Naveen Krishna, who played the lead role in Actor, directed by Dayal and produced by K M Veeresh, has written dialogues to this one. He deserves appreciation for conveying the struggling mind of a disturbed father through crispy and meaningful words.

Whereas Rockstar Rohith as a detective and a lover plays a vital role. Director turned actor Shivamani makes a special appearance in a short but an effective role. Overall,

Thrayambakam is a good infotainment loaded with history, emotion, thriller and an interesting tale to watch out for. Do not miss this one from Dayal, as he leaves you all pleasantly surprised in the end.