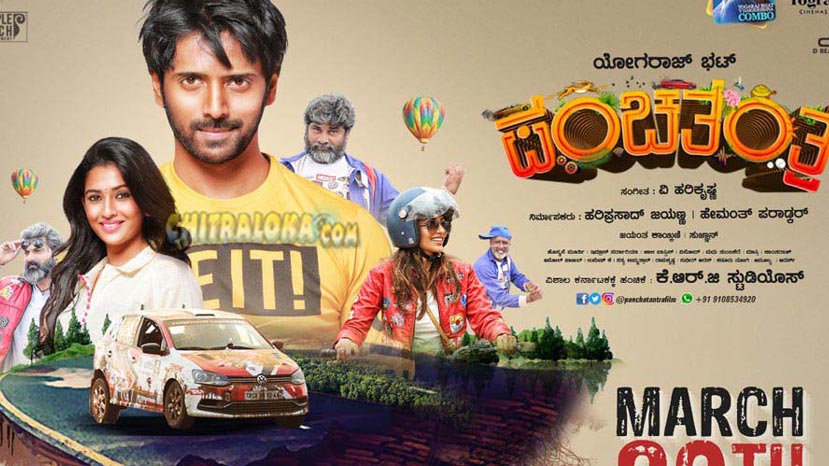 Director Yogaraj Bhat is back with yet another masterpiece, and this time he dwells upon the mindsets of two different generations - one which is full of youth but lacks maturity and other comprising the gang of senior citizens who are mischievous by nature. The value addition to it comes in the form of a care race due to which Panchatantra wins the entertaining game in the end.

This one is filled with every typical element, which the Yogaraj Bhat fans can ask for. From his typical dialogues, songs to humour and emotional content, the director has spared none to make it a complete family entertainer. Plus the adventurous race in the second half makes it a must watch film.

On the outset, it is a simple tale which is inspired from the Hare and the Tortoise story from Aesop's fable, which emphasises the value of being slow and steady in achieving one's goal. Pegged around it, Bhat's Panchatantra has two rival gangs fighting it out for supremacy. The younger lot is headed by Karthik played by Vihan Gowda and and the elderly gang headed by Raganna played by Rangayana Raghu.

With a property dispute as the epicenter, the two gang fight it out to claim the ownership of it. The escapades during the process of pulling each other's leg gives Panchatantra the much needed punch for a joyful ride. In between there is a love story of Karthik and Sahitya, the daughter of Raganna.

When Raganna finds about his daughter's love affair, the furious clash leads to an unusual challenge. The two gang then legally agree on a car race. The one who wins the race gets the property and Karthik gets his girl too. Vihaan, Akshara, Sonal and the gang puts up a formidable performance and the Rangayana Raghu, Kari Subbu and their experienced gang are at their usual best.

V. Harikrishna scores a couple of soothing romantic song along with the unusual ones penned by the director himself.

After all the laughter ride, the second half is about the car race and how the director smartly webs the age old value and its moral lessons is the essence of it. Watch it without fail to know who wins the race in the end.