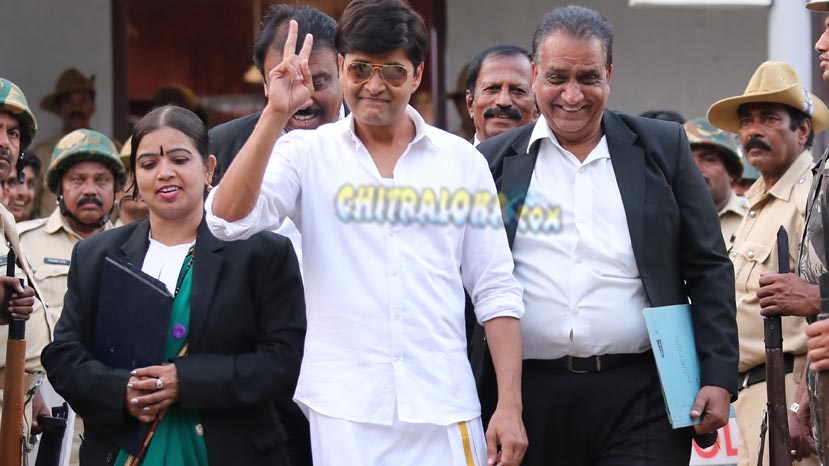 Sharan is back and so is director Santu (now he is officially Hari Santosh). Victory 2 is not strictly a sequel to the hit film of five years ago. But it has a similar theme of  comedy at all costs. If one comic twist is not enough, take two. If two is not enough take three. If three is not enough? Watch the film! That is how the film progresses  from one comic episode to another leaving the audience no time in between laughter and more laughter.

Chandru is a broker who has married the daughter of a top police officer. But his life is a mess because his wife is always suspicious of him. For one or the other reason,  he is unable to celebrate the first night with his wife. To celebrate it becomes his life's aim. Meanwhile Munna and Maamu are released from jail. Munna character is once again Sharan. Chandru and Munna are lookalikes but whenever Chandur is seen by

Munna and Maamu their lives become difficult. Maamu and Munna plan to do a very big robbery and settle down in life. They choose a secretive big house which is in the  middle of a forest. The story takes lots of twists and turns from here on. It is not just about these four characters. Every few minutes a new character is introduced which makes the story more interesting and complicated. It is a big journey which is a roller coaster ride of comedy. Is Chandru able to finish his first night? Do Munna and Maamu manage to steal the gold and jewels from the strange house? These are the questions the story finds answers to.

After the interval the fun just doubles and it would not be nice to spill the details here. Just go to the theatre and enjoy this show. You will be surprised at how the story takes different turns. There are two heroines in the film and both get ample opportunity. The songs are beautiful and add value to the story. The cinematography is breathtaking and makes Victory 2 visually rich.

This is one of the best films of Sharan and there is a long stream of comedy in the film. From the start to the finish, the director manages to keep the narration very intersting and peppy. There are good dialogues and comedy situations that will entertain everyone in the family. It is a kind of film that can be enjoyed from everyone from kids to the senior citizens. Do not miss this 100 percent entertainer.