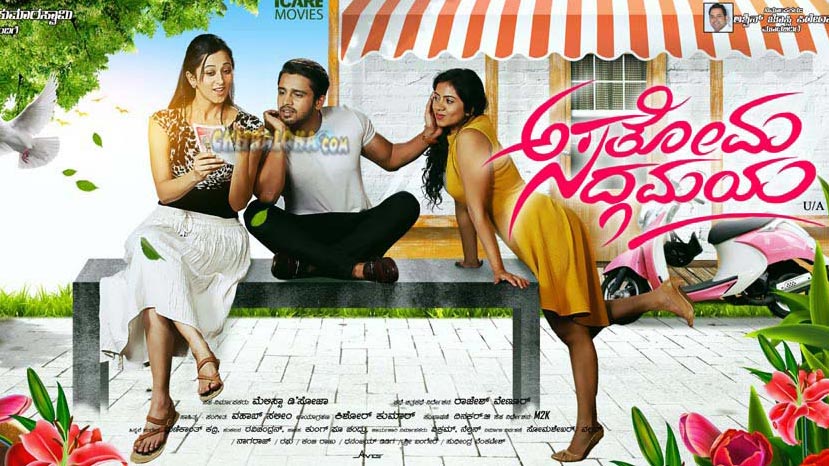 Can a film with a message be entertaining? Yes it can be if it is Asatoma Sadgamaya. Director Rajesh Venuru in his very first film has managed to give an entertaining twist to a serious topic. The film is about the importance of relationships and education. Education does not mean the one that is required for the exams but one that is required for life. By bringing together diverse characters the story manges to deliver what it sets out to.

Radhika Chetan plays a girl from Finland who comes in search of her roots in India. She has been adopted as a child by a foreign couple and now she wants to find out about her past life and the culture of her origins. In the meantime a couple from here are trying to go and settle down in the USA in search of a better life. The three meet in unusual circumstances and the rest of the film is about their self discovery about themselves, relationships and the society.

The film is paced in a way so that the views of various characters on the issues is revealed to the audience. There is excellent technical work by the director and his team including the cinematographer, editor and music composer. These aspects give the film a very high standard technically.

The three main actors are Radhika Chetan, Kiran Raj and Lasya. All the three give very good performances. Radhika Chetan's performance as a girl who has stayed away in a foreign land for most of her life is so real that you stop seeing Radhika and start seeing the character from the first scene she appears in. The coastal Kannada is used in the film which makes it stand apart as most Kannada films have a neutral Bengaluru accent.

The best thing in the film is its climax. It touches the heart as the characters reveal the director's message in it. This is one of those rare films which combines entertainmentt with educational values that can be shown in a film. In that regard the film is already a success. Those who watch it cannot but appreciate the effort of the director and his team in making such a sensible film