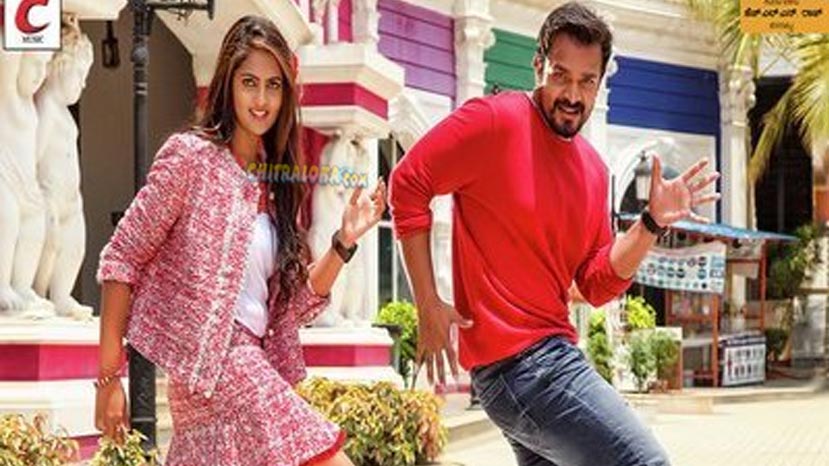 The first thing that hits you about the film Raja Loves Radhe is the number of actors. There are scores and scores of good actors for every role in the film. Apart from the hero and heroines, there are Bhavya, Shobraj, Ravi Shankar, Mithra, Petrol Prasanna, Tabala Nani and many more characters artists and comedy actors. For every role, the director has brought in a seasoned actor. So Vijay Raghavendra, Radhik Preethi and Shubha Poonja have a challenging troupe of supporting cast to contend with. This has enriched the quality of the film manifold.

The story of the film is not complicated but it has many dimensions. Each character is given enough scope and importance. At the basic level, it is a romance story. A mechanic lies about his profession to the girl he falls in love with. He already knows a girl but when he meets her he thinks she is someone else. From there on, the story takes on a different route with the introduction of many new characters.

What is love without a villain. Rakesh Adiga plays the second hero with the negative shade. But it is not entirely negative. It has shades of grey. He does what the character needs to do to win the girl he loves. There are also other villains the hero Raja has to contend with. Once the heroine, who plays the character of a radio host, announces online that she is in love with Raj, other problems also crop up. How does Raja's love for Radha win despite all these hurdles forms the narrative.

Director Raj Shekar manages to give a convincing story about what real love suffers from. It is not just a fantasy being in lvoe but real trouble. The director has given attention to every detail. It is like seeing the different aspects of love and relationship come alive on screen. The story has been given a good screenplay which keeps the narrative tight and keeps the audience glued to their seats.

Among the technical support, Veer Samarth has come up with some very good music. He has also dabbled in writing dialogues for the film and makes a very good impression. The photography gives the film a good image and the editing is to the point.

This is a story and film that is apt for Vijay Raghavendra. He has given a memorable performance. Radhik Preeti has made the best of the chance given to her. Shubha Poonja also has a meaty role. The supporting cast as mentioned earlier is huge and it is a feast on its own.