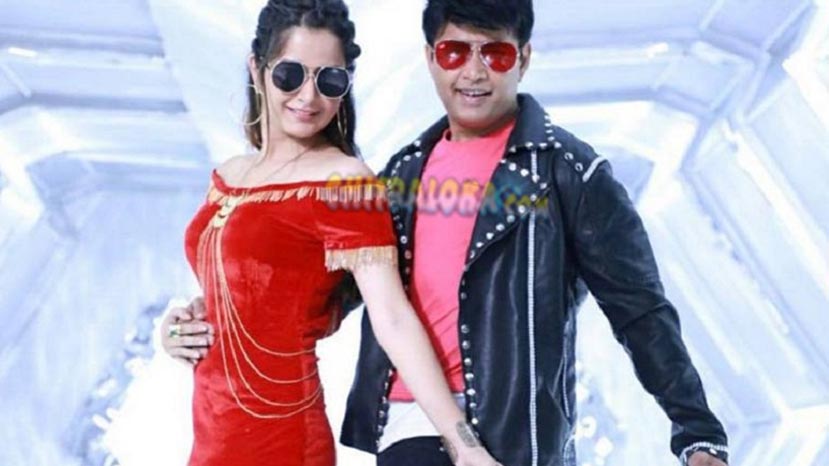 Six years after Rambo, Sharan and Atlanta Nagendra and the rest of the team is back together for the sequel. Raambo 2 is an amazing film that mixes mystery and thriller with comedy and emotional drama. It is over two hours of an entertaining journey. However there is no connection with the original film in terms of story or characters. It is something new which has a connection in the form of a car playing an important role.

Sharan plays Krishna aka Krish. From childhood, he always seeks variety in all the things he does. So his parents have to change homes and home towns often. Finally he is seen as a grown up in Goa where he is a car mechanic. His last aim in life is to find the girl of his dreams. But there is no one that matches his ideas. Finally he meets the girl of his dream and before proposing to her wants to go on a one-day road trip with her. The fun joy trip suddenly turns out to be a nightmare as he and the girl and another person have to race for their lives literally.

The suspense is revealed only towards the end and there is a small emotional story that is added to the film. The film starts as a fun ride. When Devanahalli Jayanna aka DJ played by Chikkanna joins the couple on the ride, it turns out to be a full-fledged comedy show. Brilliant jokes with superb dialogues makes it a very fun film to watch. There are also some very good songs in the film. Arjun Janya has managed to give his best to the film.

In the second half there is a surprising package of a thrilling character. The introduction of this brilliant character changes the dynamics of the film. Credit should be given to the director for coming up with such a story which gives importance to not only the characters but also minute details. Ravishnakar's entry to the film post interval is an amazing experiment with screenplay.

There is so much work done behind the scenes in Raambo 2. Superb music, amazing photography, good editing, colourful artwork and choreography catches your eyes. The acting by the four main actors, Sharan, Ashika, Chikkanna and Ravishankar is amazing. Sharan combines comedy with all kinds of emotions. Ashika as an eye candy matches the requirement with her intensity and charming screen presence. Chikkanna steals the show with his perfect comedy timing. Then Ravishankar is a treat to watch in this complex role. Do not miss Raambo 2. It is one of the best films this year.