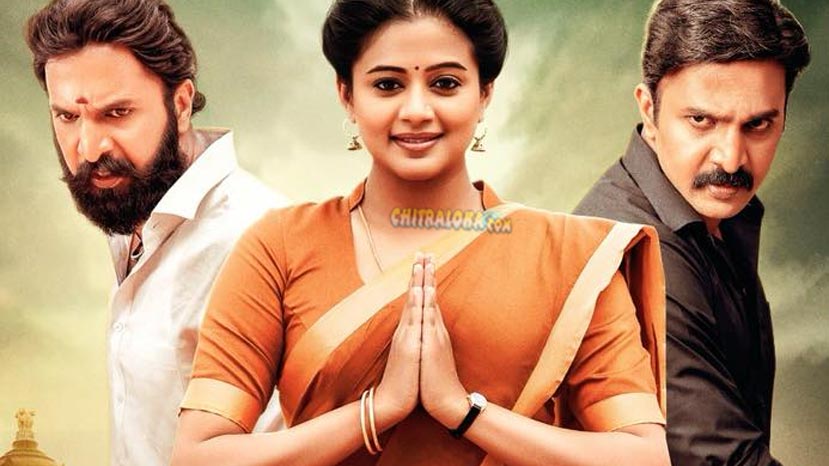 Dhwaja, a film with politics as its backdrop comes at a time when Karnataka is facing Assembly elections. There could not have been a better time. It is a political thriller that sets an exciting tone from the very first scene. The pulsating fast paced film keeps everyone guessing about what comes next. It comes across as an engrossing political story with all the right doses of commercial elements thrown in.

The film has Ravi Gowda in the lead role. It is a double role as twins. Priyamani and Divya Uruduga are the two female leads. The female roles are not just stand-ins. They are powerful roles themselves. Priyamani plays a politically ambitious young politician. Ravi plays Dhwaja an aspiring politician and Janardhan his younger twin. The film is not entirely about politics. There is romance, a revenge drama and pathos in the love story to keep the audience entertained in all ways possible.

Ravi makes a decent job managing two roles. They not only have different looks but also different shades. He has done a good job handling both. Priyamani is superb in her role as an aggressive politician who has her way at all times. There is also a very good team of supporting cast which gives the film an ensemble feel.

On the technical front the film has a rich look. You can see the money spent in each scene. There is near perfection when it comes to composing the scenes and shots and giving a colourful background. Senior cinematographer Ashok Cashyap who handles the direction has shown his class and talent in handling the story. TN Seetharam, Tabala Nani, Veena Sundar and others are perfectly cast in the supporting roles.

Dhwaja is a very good film this summer. It is an entertaining blend of serious issues and commercial elements. You begin to wonder how different politics is from real life and the common people. The entire cast and crew have come up with a commendable film that is worth a visit to the theatre.