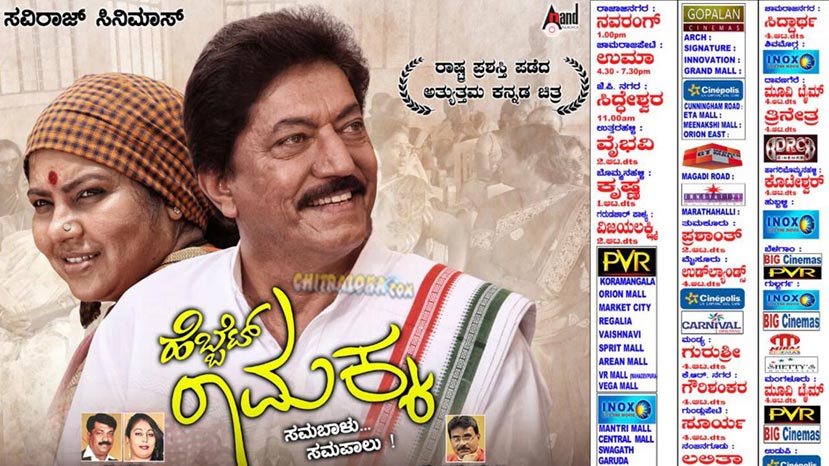 Hebbet Ramakka which won the National Award for the best Kannada film this year is a film that is an eye-opener for many reasons. It is definitely one of the best films in recent times. With excellent acting by the main cast including Tara Anuradha and Devaraj, the film warms your heart with its inspiring story and a close-to-reality narrative by director Nanjunde Gowda. For a change, Nanjunde Gowda has made a film about politics rather than the children's films he is famous for. He has managed to deliver a film that will touch your heart.

The story is about a family in a village. Kallesh played by Devaraj is a contractor who manages to get small government contracts. But he is always in trouble because of money issues. He is hardly able to make ends meet. At home is his wife Ramakka who is not only managing the household but is also the one who is doing the agriculture on the family land. Kallesh never helps her there. By a strange twist of fate, Ramakka has to contest the panchayat election and ends up as the president due to in-fighting among the other party members. Everyone thinks they can handle Ramakka for their own benefit including the party members, opposition and least but not the least Kallesh himself.

However women empowerment turns out to be something different altogether. How does Ramakka do good to the people and become a role model despite being a 'hebbet' or illitirate forms the rest of the story. There are some funny episodes, some teary ones, some surprising ones and some shocking ones. But all of them are close to reality. You will not find anything filmy in this film. Everything is the hardcore reality of village life and most importantly the politics at the village and panchayat level. Such films are very rare. We hardly get to see even in news, reports about panchayat level politics. This film shows it in an entertaining way.

Nanjunde Gowda bats for women in politics. While it seems like it is funny to have reservation in the beginning the film shows why it is important. Tara makes an impressive show of acting as Ramakka. From being a mild mannered village woman to being the panchayat president her talent is on display. This is one of her best performances in her career. Another career defining performance is seen by Devaraj. You would not have seen him in such a role ever. Though it is the title role for Ramakka (Tara), Devaraj also has a big meaty role that needs his acting abilities.

Nanjunde Gowda has chosen a very good subject and makes an impressive film. The film is also technically good with good camerawork and two good songs. The dialogues by Siddaramaiah is impressive. It is a kind of film that defines the reality of the society.