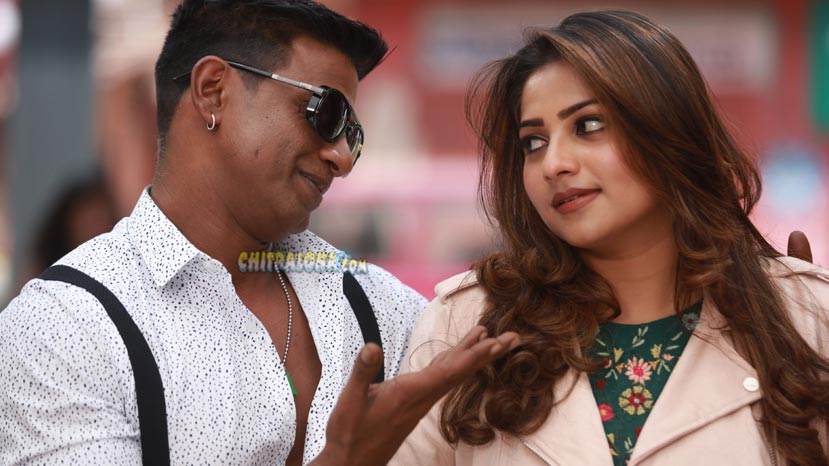 The sequel to the hugely successful Johnny Mera Naam has released. Johnny Johnny Yes Papa recreates the magic of the original film. The film rides on the two impressive characters of Johnny and Papa played by Duniya Vijay and Rangayana Raghu.

Now enter the 'New Padmavati'. Rachita Ram enters the scene. She is a career oriented girl who has set her sights on going abroad to study. But as luck would have it Johnny is in love with her. But he is still that shy boy when it comes to expressing love. Will he manage to succeed this time?

There are many near misses. It is a story of so near yet so far for Johnny. Papa as usual can make his mind but not convince Johnny on anything. This leads to a series of comedy situations involving these two and the girl. There is also a young boy named Beeja who appears at all times giving the comedy a twist every now and then.

Most of the film takes place in a huge set. This must be one of the biggest ones erected for a film. Director Preetham Gubbi has not lost sight of what made the first film a success. He repeats the success formula here. There are some very good enjoyable songs as well. The cinematography is top class and JJYP is a visual treat.

JJYP is a fun party. You should join the party at the earliest to enjoy it to the fullest. There is no denying the fact that the film has everything good going for it. From the casting to the designs, it has entertainment written all over it. The performances of Vijay and Rangayana Raghu stands out. Rachita Ram is a charming presence as she breezes through the movie entering the hearts of not only the characters but also the audience.