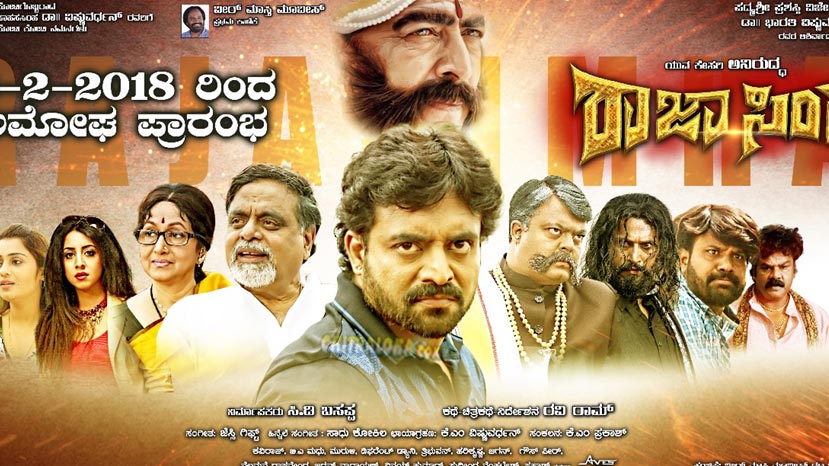 Raja Simha is a tribute to the late Vishnuvardhan. The film is a sort of continuation of Vishnuvardhan's hit film Simhadriya Simha. There is a special treat awaiting the fans of Vishnuvardhan as the actor "returns" in all glory in a special scene.  The film starts on a comedy track with Raja Simha Anirudh playing the role of a mechanic.

His has an ordinary life with a small romance in the background. Fate takes him to Simhadri. His mother is shocked with him going to that place. Flashback reveals how the character of Narasimhe Gowda played by Vishnuvrdhan in Simhadriya Simha is related to this story.

The betrayal from a family relative is revealed. What is the connection between Raja Simha and Narasimhe Gowda? Why is his mother afraid of him going to Simhadri? All these questions are answerd in an entertaining way in the film directed by Ravi Ram. In able form is Anirudh who mesmerises in comedy and romantic scenes and stuns you in the action scenes. There is a lot of scenes in which Anirudh reminds audience of Vishnuvardhan in his mannerisms and dialogue delivery. It is a treat to watch.

Anirudh has able company in the form of Nikitha, Sanjannaa Galrani in the romantic and comedy scenes. In the emotional scenes he gets to share screen with Bharati Vishnuvardhan. Ambareesh is also present in a guest role but an important character in the film.

The director's biggest success is linking the film to Simhadriya Simha. It is very convincingly done. That gives the film a big boost. Jessie Gift has come up with some very good music for Raja Simha which will remain for quite sometime. This is a kind of film you would have expected Vishnuvardhan to do. That is one more reason for his fans to watch it. Anirudh has returned to screen in style and this could just be the turning point of his career.