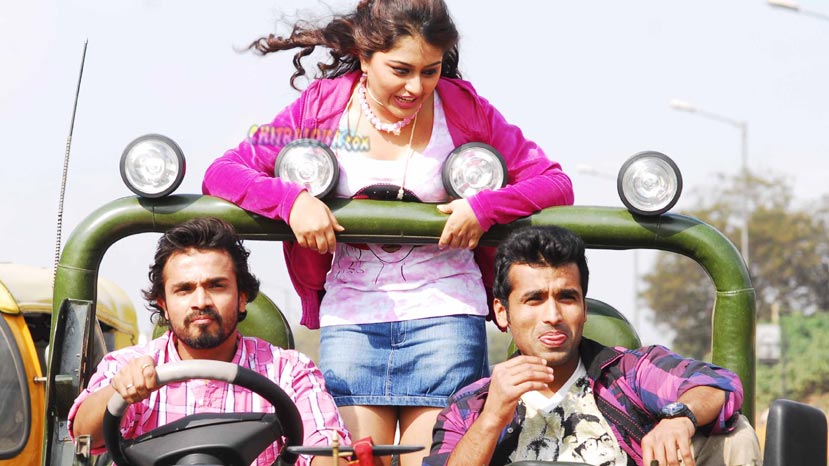 As love triangles in films go, Toss is an unusual film. Love triangles are very common as plots in romantaic films. Director Dayal Padmanabhan gives it an unusual twist and a different narrative in Toss. The film has Vijaya Raghavendra, newcomer Sandeep and Ramya Barna in the lead roles.

The two leading men play childhood friends. Nothing can come between them until they both fall in love with the same girl. They realise it but cannot sacrifice. So they go for a toss to decide who will try to woo her. But will they be true to their words. What all can go wrong in such a scenario? Will the love for the girl test their friendship and will it sustain? These things are answered in an innovative manner by Dayal.

In the acting department Vijaya Raghavendra is classy. He is one of the best actors in the Kannada film industry and he makes best use of the good role that has come his way. Newcomer Sandeep is also impressive and does his best despite being new before the camera. Ramya Barna, who was recently in the news for her surprise wedding is bubbly as usual and comes up with a eye-candy performance.

There are some good peppy dialogues and lyrics in the film which keeps the story teeming with life. There is a tight script which helps the plot moving forward and surprise elements that keep popping up one after the other. The supporting cast of Sunethra Pandit, Suchendra Prasad, Sihi Kahi Chandru and Sihi Kahi Geetha also get meaty roles.

Among the technical crew the work of editor Sri and music composer Gowtham Shrivatsa stands out. The film is two and a half hours long like the traditional format which is long for a modern film in Kannada where the film length is closing towards the two hour mark.