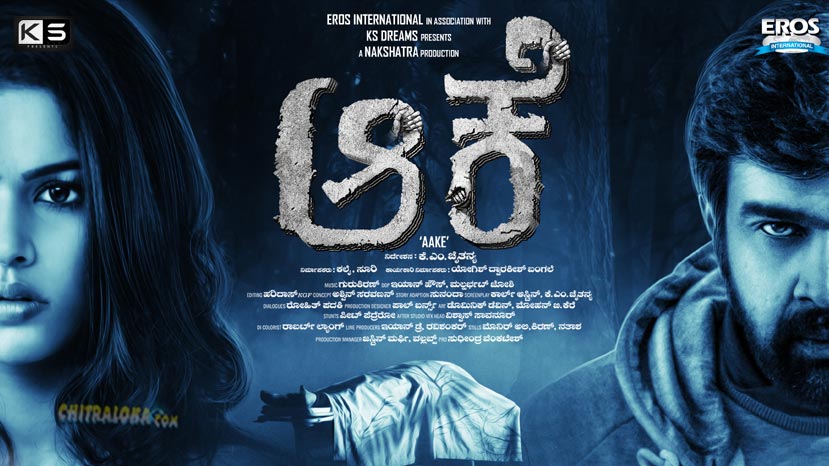 There have been many horror films in Sandalwood in the last two three films. Even in horror there are several sub genre that have been explored. Chiranjeevi Sarja has been part of horror and suspense films like Whistle, Chandralekha and Aatagara. He has teamed up with KM Chaitanya again for this horror-suspense Aake which has unique plot points and a complex story that makes it special.

Aake is not an horror film for the sake of it. There is a good story behind it which gives the characters depth and substance.  It is a double layered story. On one side there is an artiste in London, Chiru. A writer is in London to check on the story of Maya, an Indian who has become a ghost there. In the meantime in Bengaluru an actress who is a single mother has to make things meet in a difficult situations. How is it possible for these two extreme locations and storylines meet? Who is Maya who has died in a mental asylum in London and what is her connection to the taxed real people now?

To find answers for these questions you have to watch the entertaining film that is Aake. The film has brilliant performances by Chiranjeevi Sarja and Sharmiela Mandre. Achyuth Kumar, Prakash Belawadi, Sneha and others contribute as well.

Among the technical crew the background score by Gurukiran stands out. It is one of the best BGMs for a horror film you will find in Kannada films. It gives the film the right momentum and speed.

KM Chaitanya has managed to narrate a gripping tale. Aake shows his strength in screenplay narration with which he succeeded in Aa Dinagalu and Aatagara as well.

Technically the film is top class and with strong content becomes a great package. The film has an A certificate which is the only dampener for family audience with kids.