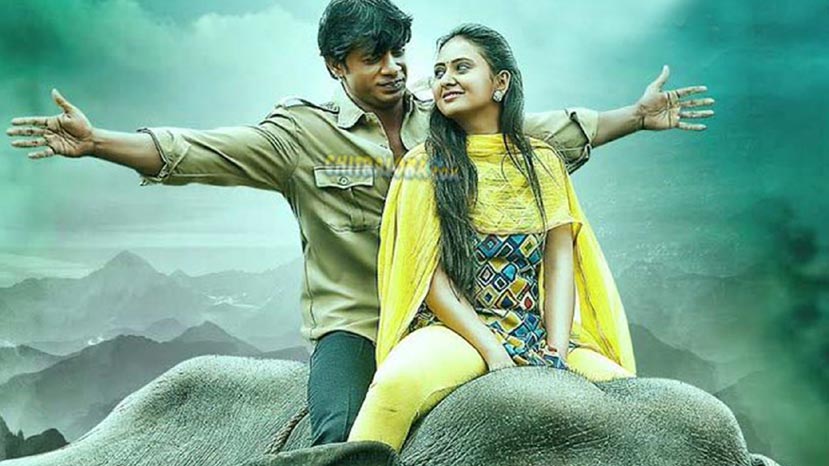 Masthigudi is a film on the need for wildlife conservation. But like any commercial film it brings in various other elements such as action, romance and drama to cater to the needs of fans and the common audience. It is one of those rare films which has wildlife conservation as its backdrop. In that regard it reminds you of films like Gandhadagudi, Jayasimha and Mrugalaya.

Here the plot is about a gang of poachers out to destroy the tigers in Nagarahole. Maasti a tribal forest guard is all that stands between the tigers and the poachers. He manages to use his skill and intelligence to keep away the poachers. But the bad men are coming back with a bigger force. Can Maasti stand up to them is the question.

Duniya Vijay as the tribal forest gurard is also the guardian of the villagers. He is seen in three different getups. First as a lover boy. Second as a brooding man and third as an old man with the fire still inside him. He is a brilliant performer.

Amulya plays the lover of Maasti. But what happened to her is a mystery. It is shown late. Even in her physical absence her character is important in the film. Kriti Kharbanda is the range forest officer's daughter and returns from London to live with him. Her character is pretty straight forward.

There is a complex story in the film. At one level it is about the tribals and their beliefs about the ghosts and tigers that they share the forest with. They also have a goddess who has to be satiated. Then there is the forest department in which Maasti also works. They have their task cut down. But they do not believe in many things of the tribals. There are bad elements in the department too. Then there are some tribals and villains from outside who are out destroy the wildlife for their personal wealth. There are also two love stories in the film.

So it is pretty much an intense film. Uday and Anil the two actors who died during the shooting of the film are mostly in the second half of the film. They are the enemy Maasti is fighting without knowing who they are. Most of their scenes are in action. It is a big loss and to see them on the screen makes for a strange feeling. The shots that were taken just before they died are also part of the film. It is just a few seconds long and makes for a disturbing watch.

Overall the film has both a message as well as a commercial formula to it. It is not the regular kind of film. The creation of wild animals especially the leopard catching incident and two tiger incidents are done beautifully. You can watch the film just for the animals.