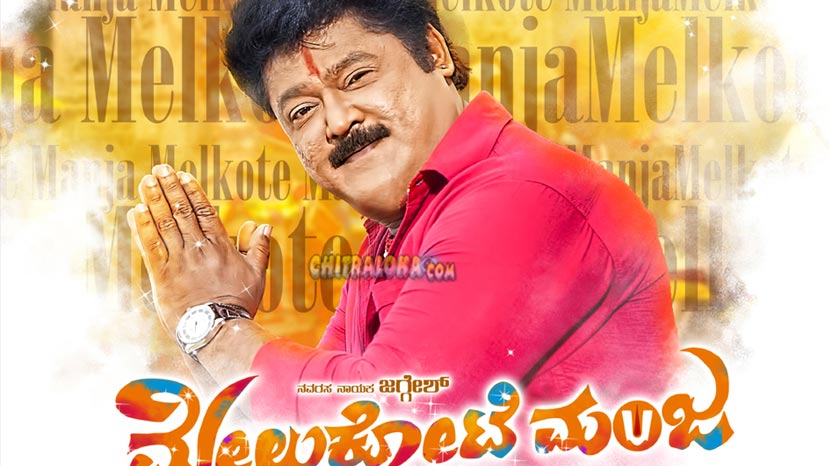 Jaggesh is at his best in Melkote Manja. He is also the story writer, dialogue writer and director of this film. He has done all the jobs with aplomb. He should be appreciated for coming out with a decent entertainer managing all the tasks. The film has his trademark comedy as well as a story loaded with mild sentiments about wayward children and parents. It has some good music, also a bit of action and witty dialogues that Jaggesh excels in. It is a perfect entertainer.

Jaggesh plays Manja, who is from Melukote. He tries his hand at many businesses and fails in all of them. He drives up a lot of debt from several people in the town. He is so deep in debt that he has to hide from the people who have loaned him is always in fear of being caught by him. His condition is pitied by his father very much. Manja falls into a bigger problem by trying to help a girl. She is being forcibly married to a relative who is also not in good terms with Manja. Half the film is about how Manja becomes successful in life and the other half is about how he helps the girl.

Jaggesh had done an excellent job not only as an actor but also as director. He has deftly handled the narration and armed with a good script manages to deliver what he has promised. He has written dialogues for each of the characters in a different vein. He has shown his huge potential in that regard. It is not only the comedy dialogues but also dramatic, sentimental dialogues that he has brilliantly written.

On the technical front there is good music and photography which Jaggesh uses to the advantage of the narrative. Melkote Manja is a good film for the family audience as well as youngsters who want to have a good outing at the theatres. Do not miss the fun ride that shows the experience of its maker.