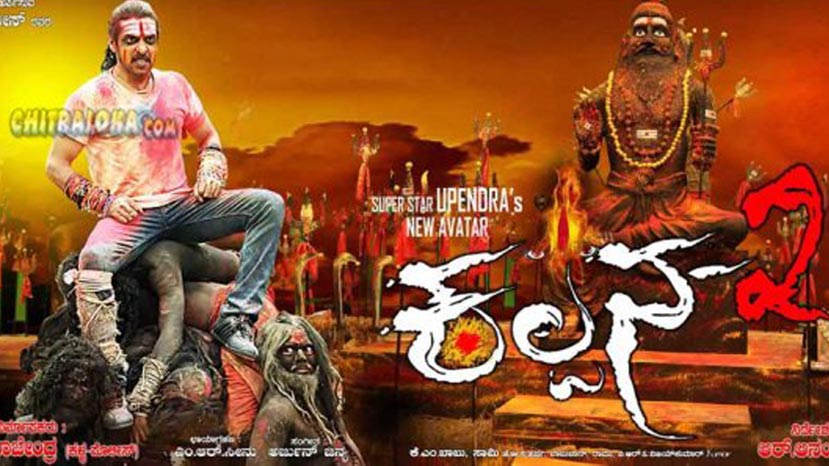 Uppi's latest is the sequel to his earlier horror-comedy Kalpana. This is also the remake of the Tamil film Kanchana 2. Upendra has already been seen in this kind of film and this film takes the entertainment value two steps ahead. With Arjun Janya's brilliant music, a story that has so many twists and turns, mind blowing acting by Upendra, Priyamani and Avantika Shetty, the film is a treat for fans and a happy outing for the family to theatres. But it has been given an A certificate by the Censor Board so viewer discretion is advised. Young children may have to avoid it.

The film is once again about a hero who is very very scared of ghosts. He fears at the very mention of the name. But he is the one who gets caught up with the problem of ghosts. Then it is a fun ride with lots of horror and scary situations and images to enjoy.

Upendra is in a double role. The first one is of Raghava a cameraman in a TV channel called Green. When the TV team goes to shoot a horror programme, Raghava is called for the job. Despite his fear of ghosts he goes because he is in love with the serial's director. There the crew face all kinds of trouble from a ghost. But just when they seem to have escaped, Avantika Shetty is possessed by the ghost. Then Upendra is also possessed by another ghost.

The two ghosts were in love in their previous life. In the second half the story of ghosts are revealed. Upendra is now Jade Shiva and Priyamani is his lover. How they were tricked and killed is the flashback. They decide to take revenge while in the bodies of Raghava and the TV director. But the villains from the past are also trying to get rid of the ghosts. Who will win goes on till the end.

The film has so much of entertainment from horror, comedy, songs to acting that it is hard to say which is better. But overall it is a good film and gives a good value for your money. Rush to the theatres.

Upendra's Kalpana 2 All Set To Release On July 15th