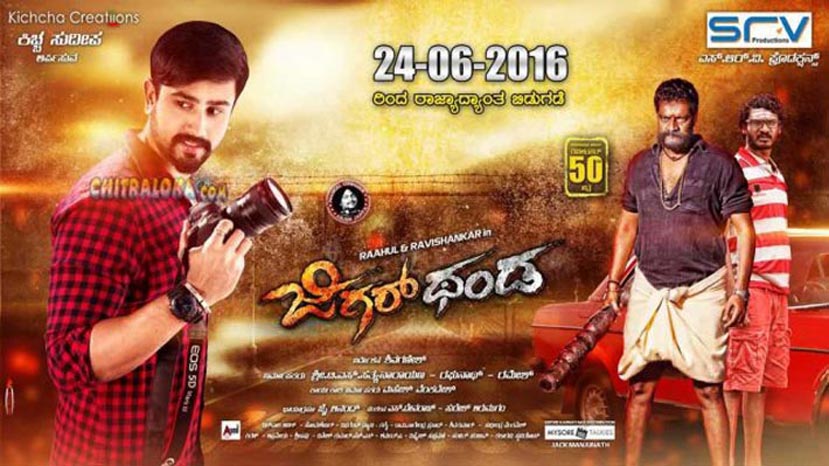 Jigarthanda is one of the best comedy films to come out of Sandalwood in recent times. The film also has the right mix of romance, sentiments and action to make it a complete commercial package. Rahul is back and so is Samyukta Horanadu. Sadhu Kokila and Chikkanna are the torchbearers of comedy. There is also Rakshit Shetty, K Manju and Guruprasad in small roles that add masala. And above all is Ravishankar as the menacing don Armuga (the name of his character in Kempegowda). The story is really about the don and his way of life and his transformation. But you do not realise it is his story till the very end. That is how the screenplay is structured which takes you on a jolly ride for nearly two and a half hours.

The film starts with a reality show and the fight between a producer and director about what is a good film; one that makes money or one that is intellectual. The beneficiary of this is a short-film maker (Rahul) who gets his first feature film to direct. But the producer tells him to make an action film. So he goes in search of a real character. He goes to a small town called Rudrapura which is virtually ruled by the don Armuga. In trying to get information about it, Rahul is himself trapped in the clutches of the don. How he manages to not only escape but also transform the dreaded don is narrated in a fast paced story by the director.

There is superb camera work and brilliant background score and editing. Arjun Janya scores some melodious tunes to match the mood of the film. There is no unnecessary things in the film. But whatever is present is for entertainment. So you also have an innovative drunk song inside a well.

The performances by all the actors is good. Ravishankar stands out as he has the most important role even bigger than that of the lead pair. Make sure that you book your tickets in advance for Jigarthanda is a sure shot success.