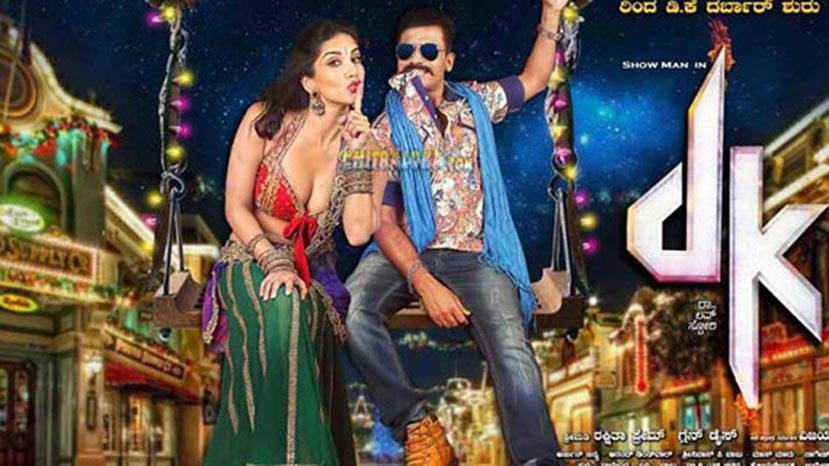 "I am not a king. I am king maker," says Prem's character in the film DK. This is true of his film career. The director who creates huge films with big stars is once again in the lead actor's role. This will be like actually playing king rather than king maker but trust the showman to bring life to whatever he does in films. DK has nothing to do with politicians DK Shivakumar or HD Kumaraswamay. But the theme is about two politicians and an election.

The film revolves around four major characters; Prem, Chaitra, Sharat Lohitashva and Shobraj. Prem is DK who is a street smart tapori who does not lose a bet on anything and everything. Sharat plays a politician who believes his daughter Subbulakshmi is his lucky charm in the political career. Shobraj enters the fray as an opponent in the election. It is DK who is behind this. The film progresses with DK and Subbulakshmi trying every trick to outsmart each other. As luck would have it the two have to fall in love and marry. So what happens to the election? Is is the two older men or the DK-Subbulakshmi pair that springs a surprise? It is not just one surprise as the film's plot goes from one twist to another turn.

The director Vijay Hampali has handled the narrative well. Prem has used a different body language. He impresses with his acting talent. Chaitra gets the chance of a lifetime and charms her way into the audience's hearts. Shobraj and Sharat Lohitashva show why they are the best character actors in Kannada. Music by Arjun Janya is passable. There is good cinematography as well. It is not a stylish film but a colourful venture which is raw and playful.