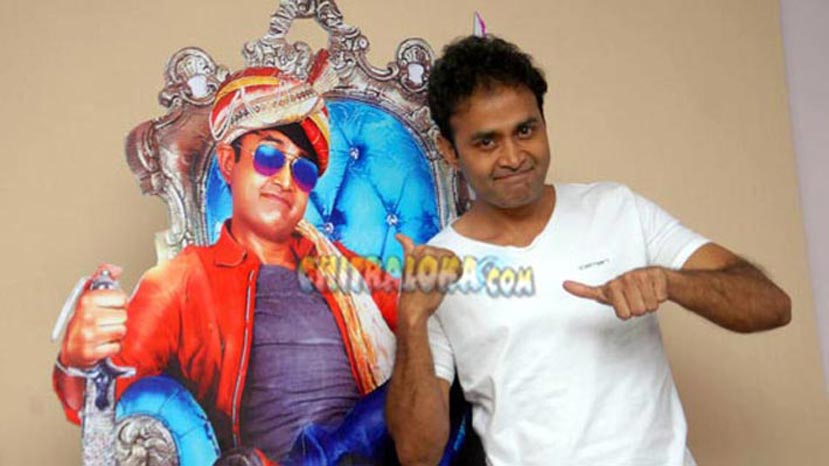 Raja Rajendra is the latest offering with Sharan in the lead. It is sure to follow the success of Rambo, Victory and Adyaksha. There is never a dull moment in this laugh riot that caters to the mass audience. The story and screenplay have been developed keeping in mind that there should be laughter in every scene. It works even though there are many scenes which are unbelievable. Cinematic licence is used to make up for it.

Ramakrishna plays a patriarch of a royal family. His three son-in-laws are out to divide the family property between them. The old man is hoping that his long lost son returns. As luck would have it, Sharan, a desperate man trying to earn quick money to treat his hospitalised mother accepts the deal to kill the old man. There are several characters each of whom gets their chance to create laughter. This includes the killer-for-hire Bottle Mani played by Ravishankar. There are many convenient coincidences throughout the film, one of them being Sharan impersonating Bottle Mani. Sharan enters the palace as the grandson of Ramakrishna and the fun just gets bigger.

Sharan has made himself the most bankable comedy star in lead roles. He proves

once again why he is the most sought-after actor in such roles. He does not shy away from being at the receiving end of jokes even when playing the lead role and that is the biggest asset of such film. He also matches the talent and comic timing. In this film, he also has to do a few scenes as a king and he does not disappoint. Since the narration even in those scenes require comedy, he pulls it off sweetly.

Ishita Dutta is a perfect match as the leading lady. She makes an impressive presence. Vimala Raman however has a very small role but looks great. All the characters get their 15 minutes of fame in screen space. Srinivas Murthy, Ramakrishna and Sadhu Kokila are perfect examples. Even though they play supporting roles you cannot imagine the film without them. Ramakrishna gets a great role which he manages with elan.

The film's drawbacks are its songs. They are not as great as they were expected to be. Songs in Sharan's recent films as hero were big hits. Compared to them, songs in Raja Rajendra are weak. The film has the perfect length and editing is crisp. Cinematography captures the mood well while the director should concentrated a little more on the wide-angle shots which sometimes look bare. This is the perfect film to enjoy your weekend and there is no doubt that Sharan has a new hit on his hands. P Kumar has managed to get together a simple story and transform it into wholesome entertainment. He wins as the story writer and director.