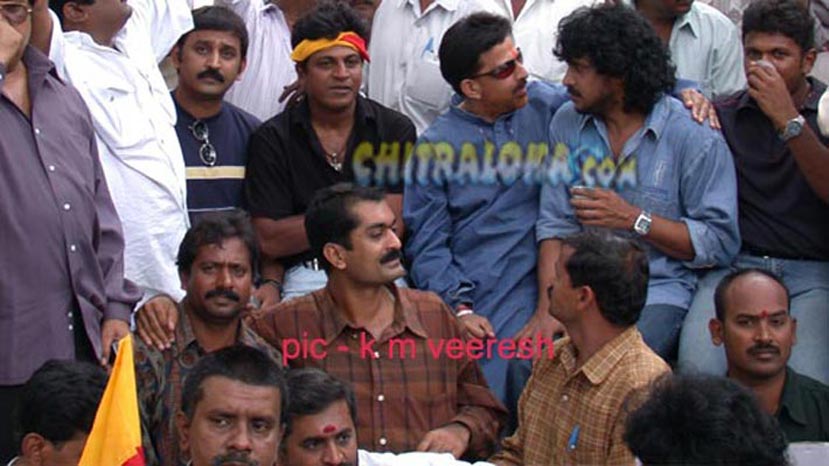 Monday’s mammoth protest rally reminds of the story mountain moving to man. The state deputy chief minister came to the spot of protest rally and assured to form a committee tomorrow and take the decision given by it in three days and fully implement it. That’s great news. But who will constitute a committee and submit a wonderful report that is everlasting and ever helpful to Kannada films? A million dollar question!

However the day’s event is not a very small development. Amidst disrupting the traffic for four hours on the busy JC road and Kempegowda road and police throwing lathis on a few persons the rally went on peacefully.

‘Let this situation of asking for safety of Kannada films do not come again’ Dr.Rajkumar made a perfect speech on this occasion. He also submitted a memorandum to deputy chief minister highlighting the demands.

The rally that started off at 10.45 am from Town Hall moved to Kempe Gowda road after garlanding of Kempegowda statue by Shivrajkumar. At a special dais erected in front of Janata Bazaar the rally assembled around 1 pm.

All the shops and business establishments were closed in the rally areas for half a day. Everything was back to business at 4 pm.