KFCC Gives a List of Demands to Roshan Baig 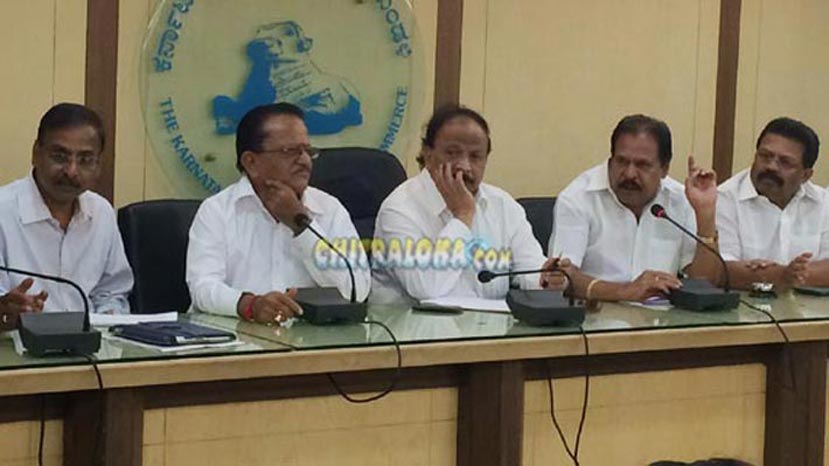 The Karnataka Film Chamber of Commerce has given a list of demands concerning the film industry to new Information Minister Roshan Baig. On Tuesday morning Roshan Baig visited the KFCC where he was felicitated by the KFCC members. KFCC secretary Sa Ra Govindu said the KFCC members will meet the Minister shortly and submit a memorandum, for which the minister said that he will sit for one hour and he wants to hear the problems of the Kannada film industry immediately.

Sa Ra Govindu was the first one to submit a list of demands concerning the film industry. He requested the new Information Minister to conduct award functions which has been pending for the last few years. Baig immediately replied Sa Ra Govindu to tell the film industry people not to go to the court regarding the awards.

Govindu continued with his demands and told that even if the Government is giving subsidy, still many producers are not surviving. 'Many producers who have produced films have come to road. Other languages are dominating. CCI has made it more difficult for the producers to survive. In multiplex rates are very high and they are screening many other language movies compared to Kannada' said Sa Ra Govindu. He also urged the minister to send teams from the department to Tamil Nadu and see the facilities given to the film industry.

KFCC's former president Dr Jayamala said that though the Government has initiated the Kalyana Nidhi, the amount has not yet been released. Jaimala insisted that the amount has to be released soon so that it can be spent on to quality work. Basanth Kumar Patil requested for the single window system to be cleared soon, A H Bhatt asked that films should be released with 100% tax free letter. K V Chandrashekhar insisted that the presidents for Karnataka Chalanachitra Academy and the Kanteerava Studio must be appointed immediately. Rajendra Singh Babu urged the minister to make Bangalore the cultural capital and urged that the ticket rate must be reduced immediately. A R Raju said that it has become difficult to shoot in Bangalore and asked for a film city. S A Chinnegowda urged the Government to give a subsidy to theaters who screen only Kannada films.

KFCC president H D Gangaraju welcomed the minister. Distributor Basha and others were also present at the Occasion.