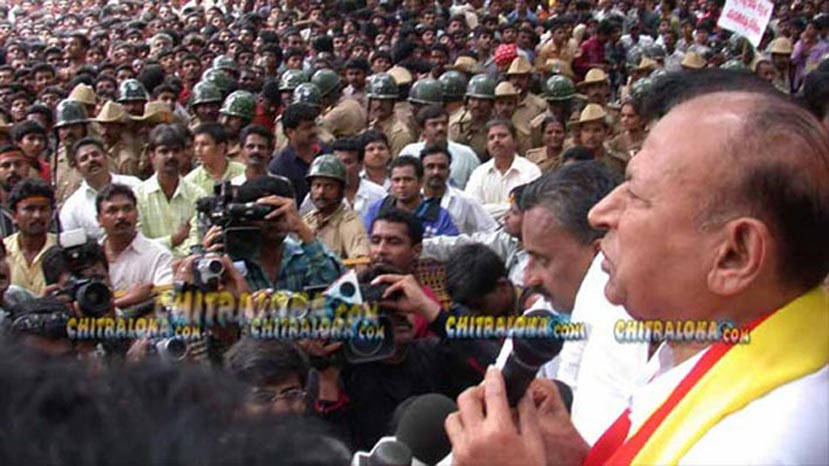 Kannada matinee idol Dr. Rajkumar has made it clear that Kannadigas are not against to other language films but the time has come to fight for the survival of Kannada language. Addressing a huge gathering at the rear side of Vidhana Soudha, Dr. Raj said that it is very unfortunate that Kannadigas have to come to streets to protect their mother tongue. I hope the State Government will work for the betterment of Kannada film industry. Other language film industry should understand our problems. Our aim is to live and let live,’’ Dr Raj said.

Speaking on the occasion, Vishnuvardhan said that Kannadigas should not allow other language films to flourish at the cost of Kannada films. ``People who have migrated to Bangalore want jobs and shelter here but they do not want Kannada language. It is very unfair. They should encourage Kannada films,’’ Vishnuvardhan said.

Upendra, in his inimitable style, has asked the gathering to continue the struggle till the State Government comes out with a formula for the benefit of Kannada film industry. ``We have to fight till we achieve our demands,’’ Upendra said.

Later Chief Minister N. Dharam Singh, accompanied by other ministers Mallikarjuna Kharge, Prakash and other dignitaries met Dr. Rajkumar. Addressing the gathering Singh said: ``Let us solve all problems through talks but not with confrontation. My government would strive hard to solve all problems of Kannada film industry.’’

Meanwhile Dr Rajkumar has submitted a memorandum to the Chief Minister.

All theatres should and must screen Kannada films

State Government should impose Rs 50 lakh entry tax on other language film if the distributor is particular in releasing the film in Karnataka.

The Government should collect 100 percent entertainment tax from non-Kannada films.

The Governnment should implement Mahajan report.

Kannadigas should get employment in Central, State, semi-government, MNC and private companies as per Sarojini Mahshi report.

Government should withdraw all cases against Karnataka Rakshana Vedike members.

However the crowd lost patience and started throwing chappals at Chief Minister. After dispersing from the venue, the mob went beserk and burnt motor vehicles and pelted stones at buildings and Bangalore Mahanagar Transport vehicles and buildings.