Details
Category: Flash Back
Published: 19 May 2008 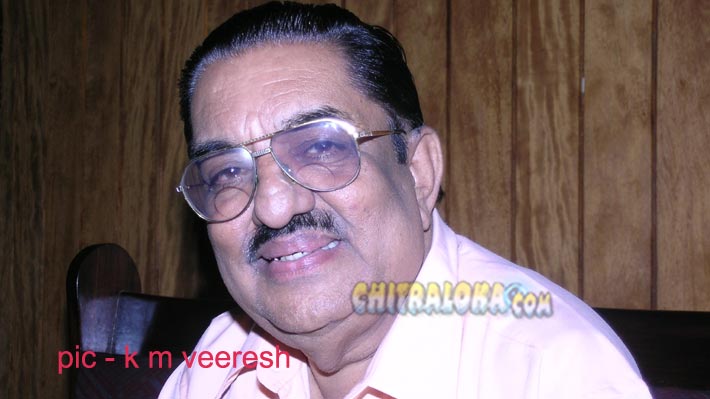 The death of R.N.Jayagopal, a well known and hugely respected connoisseur of Kannada film industry has shocked many of his fans and film personalities who were appreciative of his multifaceted talents. Jayagopal had written over 12,000 Kannada film songs and had made a mark as a dialogue writer, film director and also as an actor. He had also made a foray into the Television industry directing and writing for serials which became very popular. However his ardent desire to direct the epic Raamaayana in Kannada remain unfulfilled as he had died even before completion of his work for the serial. Jayagopal also ran a Kannada school in Chennai which was managed by his wife Ms. Lalitha. He is survived by his wife and son who is now working in US as a soft ware Engineer.

Many of Jayagopal's friends in the Kannada film industry had never expected that his death would come so near. Jayagopal was always in his smiles and pink of health. He was well dressed and was considered as the most respected film writer in the Industry. He was a symbol of good manners and high talents. He was suave and cultured. Well known director D.Rajendra Babu, a close friend of R.N.Jayagopal was almost in tears when he spoke about many humane qualities of him and his great talents. "I think Jayagopal was an outstanding lyricist who can be compared to any top film lyricist of the film industry. He was a bundle of energy and always showed his enthusiasm in writing lyrics and dialogues. I can remember many songs of my films written by him in just fifteen minutes. I would always discuss with him about the stories of my films and he would also contribute to strengthening the story with his suggestions. I also used him as an actor in one of my films because I could not think of any other regular actor to portray that character' says Babu.

R.N.Jayagopal was a legendary writer who worked in the company of some great writers like Chi. Udayashankar, Vijaya Narasimha, Sorat Aswath, Hunasuru Krishna Murthy and others. He was the only film writer who continued to write till his last breath and was always in an encouraging mood when he worked with young directors and technicians. He became a director through Dhoomakethu in 1968 and did direct many Kannada films and serials, but he remained preoccupied by writing lyrics for Kannada films. His lyrics were meaningful and had a high degree of lyrical value. Many of his songs have been hugely successful not only for the tune composition, but as well for the quality of the songs.

R.N.Jayagopal started writing lyrics at a time when many young talented people like Puttanna Kanagal, K.S.L.Swamee, Lakshminarayan and Geethapriya entered the film industry as directors. And all of them were fond of Kannada literature and Jayagopal had an opportunity to interact with other talented youngsters. And most of lyrics were written after lot of confabulations with the directors. Jayagopal remembered that many of his top songs like "Haadonda Haaduve Nee Kelu Maguve', 'Neerinalli Aleya Ungura', 'Sanyaasi Sanyaasi Arjuna Sanyaasi', 'Bellimodadha Anchinindha', 'Gaganavu Ello Bhoomiyu Ello' were all written after lot of discussions with the director and the music director. 'Now a days the director will explain the sequence and the Music director would have already composed the songs. We are left with no alternative but to write to the expectations of the director. Still I am happy that my songs have been even now appreciated for their lyrical value' Jayagopal had said in one of his interviews.

The Karnataka Film Chamber of Commerce has condoled the death of this legendary writer.