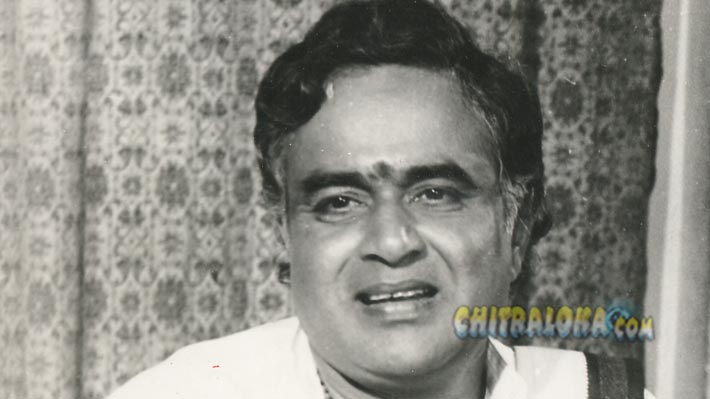 Within a month the Kannada film industry has lost two towering personalities. Both hailed from Mysore. A month ago M.N.Basavaraiah of Premier studio died on account of prolonged illness and today the top supporting actor an excellent theatre personality too Rajanand died of acute sugar. He was ailing for a long time.

Born on December 2, 1927 Rajanand has seen the poverty from his younger days. To fill his stomach he joined the theatre at the age of 10. Kalkoti, Samaja Vikasana, A.S.Seshachar, Kamala Kala, Soorath Ashwath, Hirannaiah and Yoganarasimha troupes given him good placement to act and progress in the field of writing plays, vachanas and poems. He has written 200 plays, 3000 poems and 9000 vachanas.

With lot of ambition he started Ranga Vaibhava theatre group in 1965 and maintained it for 10 years. Financial crisis made him to close his brainchild.

It was 480 feet length dialogue Rajanand completed in one take in his debut film ‘Dhanapisachi’ in 1967. The onlookers were baffled at the capacity of Rajanand. After this film he never turned back nor tapped anybody’s door for work. He has acted in over 200 films. Chakrathirtha, Yeradu Kanasu, Mayoora, Ranganayaki, Guru Sishyaru, Halunda Thavaru are some of his notable films. He has bagged the state award in 1992 and supporting actor award for his performance in ‘Ranganayaki’ directed by Puttanna Kanagal. In Ranganayaki Rajanand played the role very apt to his personal life and it was almost an autobiography for him.

He is known for discipline and ability to create something new on the spot. His mythological and social plays like Harischandra, Thabbali Thangi, Sangolli Rayanna, Kittur Chennamma and Ashoka Chakravarthi are unforgettable.

When the news of Rajanand suffering from sugar complaint reached the masses he received wonderful aid for his ill health.

A simple and Yogic personality Rajanand never used to move out of his house when there is no work.