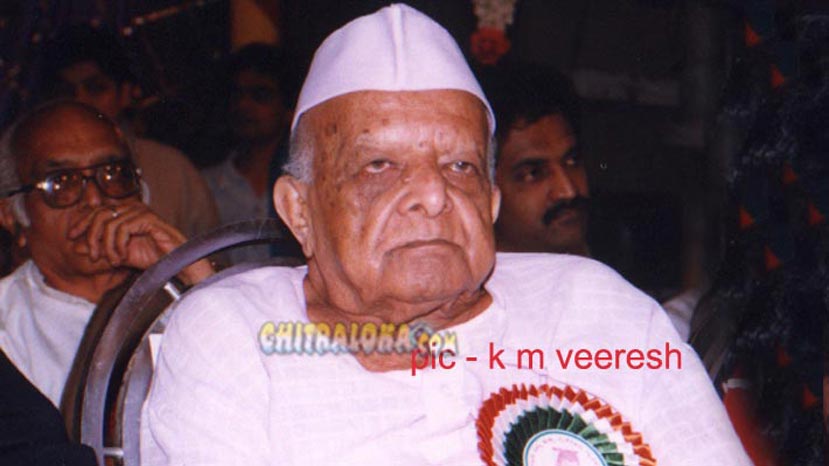 The doyen of folk art nonagenarian Gandhian, poet, lyricist who went to jail seven times fighting for freedom of India – Dr. S.K. Karim Khan the bachelor with brain has breathed last at Jain Hospital in Bangalore at 11.30 AM . He was ailing for quite some time. The Karnataka government had taken care of medical treatment of this simple human being who imbibed highest qualities in his life.

Born to an Afghan soldier Abdur Rahman Khan and Jainabi at Sakaleshpur in Hassan district, Dr. Khan was inspired by a call given by father of the nation Mahatma Gandhi for the youth to take part in the freedom movement. He became an ardent admirer of Gandhiji and his philosophy. He went to jail over seven times for the cause of Independence. He associated himself with noted persons such as Bhashyam, Subramanian, K.C. Reddy, T. Siddalingiah, and Kengal Hanumanthaiya. He also served in the Royal Indian Navy for some time. Winner of several awards, including the prestigious Nadoja, Janapada Sri, and Rajyotsava, he has authored over 80 plays for professional theatres after he left politics for personal reasons.

In 1960's he started 'Janapada Prakashana' and made available this publication at a cost of 50 paisa. The affection he developed to the environment, his learning from the school and his interest in Kannada language earned him a special place in Karnataka.

After gaining independence, he could have asked for any position he wanted. He had the opportunity to become MLC twice, but he sacrificed every thing for folk culture.

Dr. Khan imbibed in him the Hindu philosophy and wrote story, screenplay, dialogues and lyrics for mythological films in Kannada. He had written more than 250 songs and contributed for 30 Kannada films in various capacities. He was aware of all the Hindu Puranas and anecdotes. The strong Guru Narayanashastry he had in his life has given him splendid exposure to Hindu philosophy.

He made debut from D.R.Naidu's 'Swarna Gowri' Kannada film. He wrote screenplay, dialogues and songs in his debut film. Gange Gowri, Shivalinga Sakshi, Jeevana Tharanga, Bevu Bella, Rajeshwari, Dombara Krishna are the other films he worked are popular on Kannada screen.

He was given the Kempegowda award at the Bowring hospital by Bangalore city mayor Mumtaz recently.

Receiving another award in Kolar had told that "I am touched by this gesture ... I will always be a nationalist."