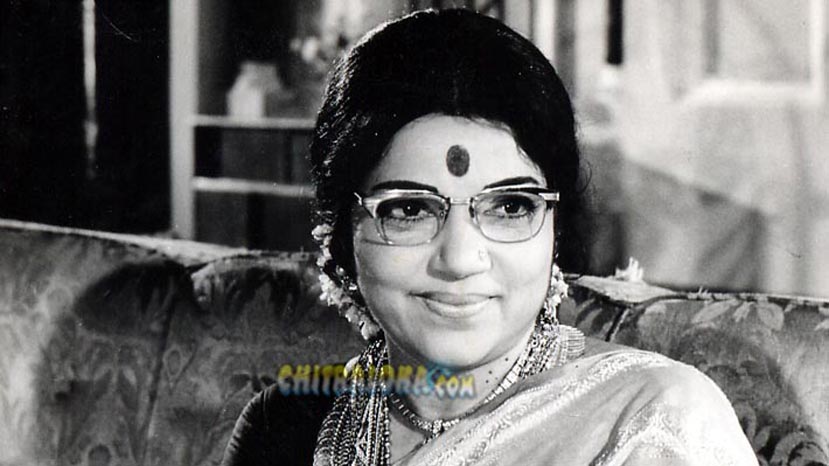 Padmashree Dr. Bhanumathi multifaceted personality who entered the cinema at the age of 13 seven decades ago has breathed her last at the age of 80 in Chennai. In 1943 released Kannada film 'Radha Ramana' Bhanumathi was one of the actresses for the direction of Jyothi Sinha. It was the days of Telugu artiste especially female acting in Kannada films. It started from Varalakshmi and M.V.Rajamma took courage to produce 'Radha Ramana' film in those days. Dr.Bhanumathi played the heroine in 'Nala Dhamayanthi' Kannada film opposite Kemparaj Urs. The Kannada film 'Bettada Kalla' was made after M.G. Ramachandran and Bhanumathi starring 'Malai Kallan' was released in Tamil.

The recipient of national award for her book 'Naalo Nenu' written in Telugu published by K.N.T. Sastry - this book is a rich repertoire of her observations more as a middle class housewife, happenings in the cinema industry which she entered six decades ago. The recipient of Padmashri from late Prime Minister Smt. Indira Gandhi she also received the Sahitya Academy award in 1965 for 'Attagari Kathalu'. She is also a humor writer besides being a painter and astrologer. Story writing, direction, song composing and production were started by couple Bhanumathi Ramakrishna in 1950.

Her ability to sing in a prolific style on spiritual subject got her honorary doctorate from Andhra and Venkateshwara Universities. Her first directorial venture 'Chandirani' in 1953 was made in Telugu, Tamil and Hindi languages. Her performance in 'Arivaali' opposite thespian Shivaji Ganeshan was talk of the town when it was released. She is the winner of national best actress for three times. She was termed as 'a perfect performer' by former Tamil Nadu chief minister C.N. Annadurai. She was the principal of Madras Music College for four years in the late eighties.

Dr Bhanumathi Ramakrishna never looked back or fell short of ideas. In 1984 she experimented with 'Bhakta Dhruva Markendeya' children film with all the artistes of below 16 years age.

What's most fascinating of this brilliant and daring Dr. Bhanumathi was that she completed SSLC and PUC at the age of 40 - the time when she was a popular heroine in over 100 Telugu and Tamil films. 'I am not self conscious and arrogant' she used to shot back at her detractors. I think of putting things in more positive way because I am confident, independent, frank and down to earth she remarks in her autobiography.