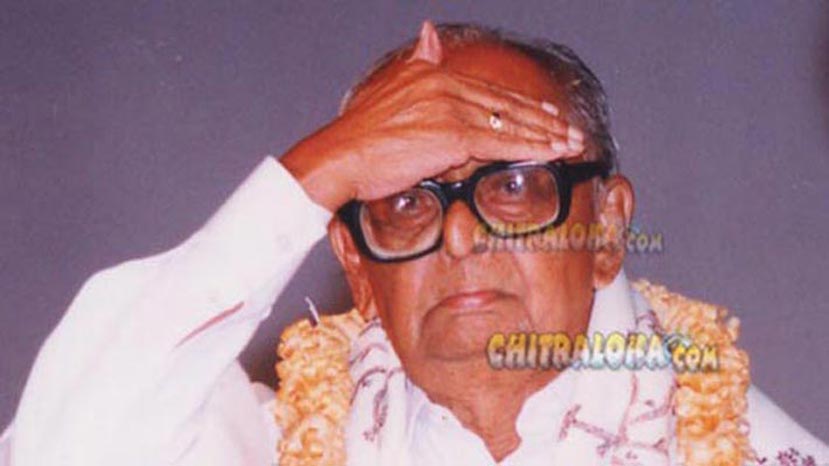 An era of doyen of studios M.N. Basavarajaiah – the King of studios - of Premier Studio Mysore has ended. The 90 years old pillar of strength for filmmaker’s of yesteryears died after a prolonged illness at BGS Hospital in Mysore. He leaves behind three sons and five daughters.

He is the winner of prestigious Dr. Rajkumar award in the year 1996-97.

The famous seven floor studios ‘Premier’ has accommodated 900 films in Kannada, Tamil, Telugu, Malayalam and Hindi to shoot. The films of Dr. Rajkumar, Vishnuvardhan, Ambarish, Shivarajkumar, MGR, Shivaji Ganeshan, Jayalalitha, Dharmendra, Rajanikanth was shot on these floors. This has indirectly helped the tourism in Mysore to grow.

Basavarajaiah produced only one Kannada film ‘Striratna’ in which K.S.Ashwath made a debut as an actor. In this film the present Tamil Nadu chief minister Jayalalitha’s mother Sandhya and her sister Vidya also acted in the lead roles. The film was partially in color in 1955 itself.

Basavarajaiah born in the year 1914 is a man with flourishing thoughts. At the 20th year he joined his father’s insurance company. When the Insurance companies were taken over by Government of India Basavarajaiah evinced interest in constructing studio. He bought a place at Chittaranjan Mahal that was attached to Mysore Palace properties from the then scion of Mysore.

He was the one who took initiative in introducing the subsidy to Kannada films in 1967. Then he brought in the required interest in the minds of Kannada film producers to shift from Madras to Mysore to shoot. He has been a guiding force for many of the producers. He had financed many of the producers who left their production in the middle. The famous Mahatma Pictures ‘Shivasharane Nambiyakka’ directed by veteran B.R.Panthulu was completed in 22 days and the first copy was

ready from this studio on the 31st day.

The studio is also equipped with all the facilities for shooting and post-production.

How is the condition of the Studio now? – It is in a dilapidated condition. Now it is a Godown. Hotels and student hostel are functioning from here. Oho! What a sad state for the giant dream