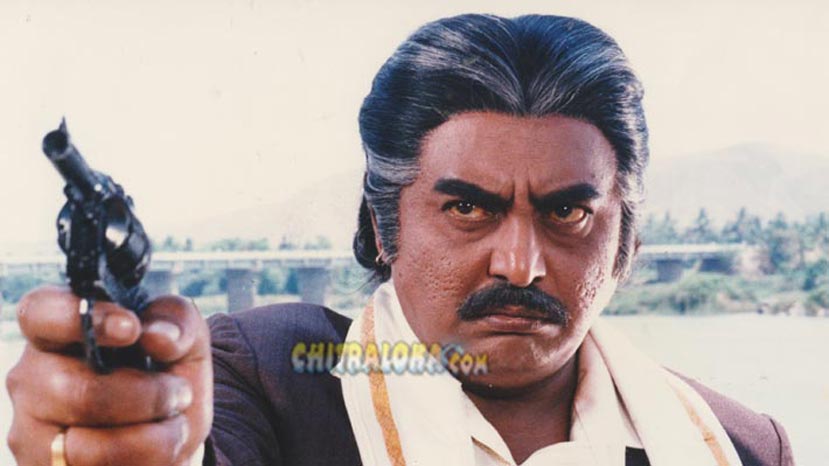 The sad beginning of year 2006 for Kannada filmdom! One of the top villains of yesteryears VAJRAMUNI breathed his last at 5.30 am on Thursday at Sagar Appollo Hospital in Bangalore. 'Kanchina Kanta' Vajramuni journey ends with strong imprints in Kannada cinema. 62 years old Vajramuni was suffering from kidney failure and he was taking treatment since a few years. He leaves his wife and three sons. All his sons are educated and they are established in business. The cremation of Vajramuni takes place at 2 pm today at his farm house in Bangalore. He was the winner of Lifetime achievement award announced by the Karnataka government for last year. This award is yet to be given.

The actor par excellence ever since he did 'Prachanda Ravana' later transformed as one of the best villains of Kannada cinema. He was the bully and brutal landlord in many films, he had the ability to create fear psychosis in women audience and they often cursed him. But at the end of shooting he was a very humble and affectionate personality.

With hundreds of films to his kitty in over three decades of career Vajramuni is no doubt a household name. A drop from college Vajramuni got diploma in Cinematography.

The celebrity director Puttanna Kanagal in 1967 offered a role for Vajramuni in 'Savira Mettilugalu' but that film never saw the light of the day. Unhappy Puttannaji offered another role for Vajramuni in 'Mallammana Pavada' in late sixties that was a hit. After that he did not looked back. He has acted in over 300 films as villain.

Politics was not new to Vajramuni. His father was Bangalore City Corporation member and his uncle Dayanand Sagar was a well known politician and educationist. He has been the strong follower of Congress since the age of 12. In at least 15 elections he campaigned for 15 elections. He tested his luck in politics in 1994. He contested from Basavanagudi Assembly seat that was represented by Ramakrishna Hegde the former chief minister and lost the battle.

Vajramuni known for his sterling performance with fantastic voice was basically a shy person. Coming to acting was not entertained in his house. When group of friends decided to collect funds for a social cause he put the make up for his face in his younger days. That became a habit and he was afraid what his father would say. At the 50 th show of his play he somehow arranged to get his father as chief guest for the play. The admiration he received from his father decades ago was my memorable day he had disclosed in one of his interviews.