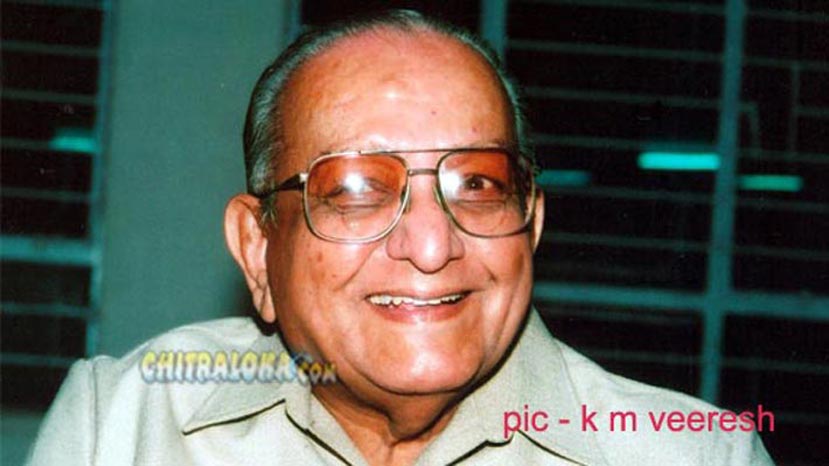 Acclaimed producer-director-cinematographer and studio owner BS Ranga is dead. He was suffering from illness and the end came on Sunday afternoon. He leaves behind his son Vasanth who is a film and television film producer and was owner of Vasanth Studios in Bangalore. He was 94. He was born in Magadi near Bengaluru and had worked initially in professional theatre.

B.S.Ranga was the producer-director of Kannada film industry's full fledged colour film Amara Shilpi Jakanachaari starring Kalyan Kumar and B Saroja Devi. He had directed several legendary artists like Dr. Raj Kumar, M.G.Ramachandran, N.T.Rama Rao, A.Nageshwara Rao and Shivaji Ganeshan during his heydays. Ranga started his career as a cinemetographer in films through the 1940 released Hindi film Pardeshi made in Mumbai and later became a producer and director. He owned the Vikram Studios in Chenai and later Vasanth Studios in Bengaluru.

Bindinganavale Srinivas Iyengar Ranga was born on 11 November 1917, in Magadi.

B.S.Garudachar who was a former Police Chief of the state was his brother. After an

art-enriched childhood wherein he interacted with many stage personalities, B.S.Ranga entered the field of photography. As with most things he attempted, he excelled in this through a combination of raw talent and dogged hard work. At the tender age of 17, the self-trained Ranga sent some of his work to be exhibited at the Royal Salon in London, and was elected an Honorary Fellow of the Royal Photographic Society.

Subsequently, he moved to Bombay (now Mumbai) and apprenticed himself to the famous cameraman / laboratory technician, Krishna Gopal. BS Ranga then embarked on an illustrious film career lasting more than five decades, during which he played the roles of cinematographer, director, producer, laboratory owner, studio owner, exhibitor and script-writer, sometimes all at once for one of his productions. His production company, Vikram Productions, gained fame and fortune throughout the 60's and 70's, and won BS Ranga many prestigious awards, including two President's Awards. The first was for "Tenali Ramakrishna" in Telugu (starring N.T. Rama Rao and Akkineni Nageswara Rao), and the second was for "Amarshilpi Jakanachari', the first colour movie produced in Kannada.

He worked for 45 films in four languages including Hindi and even produced Hindi films. His last film was Huliyaadha Kaala with Prabhakar. Earlier he directed "Bhagyavantha' a movie for Dr. Raj Kumar's home produciton banner in which the present super star Puneet had acted as a child artist and Dr. Raj Kumar had acted in the role of Saint Raghavendra Swamy.