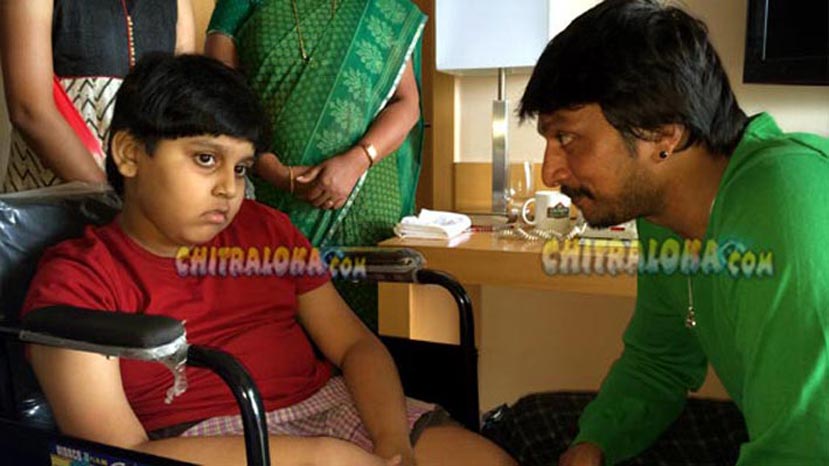 On Monday, the eve of his birthday, Sudeep was in Mysore. While he was readying to go to the cricket ground with the Rockstars team, a family visited him in the hotel room. They had brought their son Aaditya, who is a big fan of Sudeep, to meet him. But Aaditya was in a wheelchair.

Sudeep enquired and the child's father, Bharati Shankar, who is also a film personality having directed the film Autograph Please, informed that Aaditya suffers from a rare disease called the DMD in which the muscles slowly become weak after the age of five. There is no known cure for the disease and the only thing the parents can do is try to keep the child happy. Sudeep was moved by the child's condition and fed him sweets and chocolates. He enquired about Aaditya's condition and likes.

Aaditya turned out to be a big fan of Sudeep and always eager to watch his films. The disease does not let him to be able to sit for more than one hour, but Aaditya watched Maanikya in a theatre and told Sudeep he wants to see him in more films and not just one in a year. Sudeep promised to act in more films and to visit him at his house. After the child and his parents left, Sudeep was in tears and instructed his staff to take details of the child's family. He wanted to financially help them so that Aaditya's remaining years are spent happily. Sudeep said that he would pay for the family to take Aaditya to be taken to all the places he wants to see.