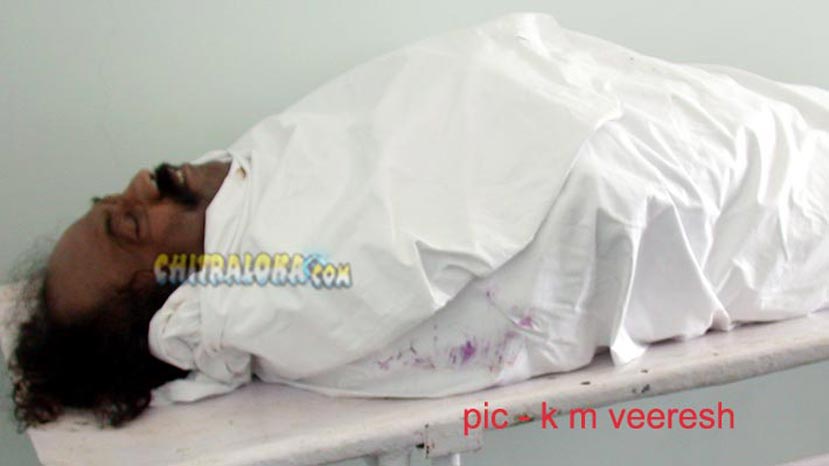 What happens after donating the body of veteran 57 years actor Lokesh to M.S.Ramaiah Medical College? Chitraloka attempted to know this out of curiosity that turned out to be a socially relevant public story too.

Chitraloka approached the department of Anatomy at M.S.Ramaiah Medical College and stayed for two hours at the hospital to get more knowledgeable information. The body of Lokesh was kept in mortuary. For getting more information the main force behind this was the death of Lokesh.

The Professor of Anatomy Mr R.N. Kulkarni hailing from Gulbarga is in the Anatomy department since 23 years and Dr. Kiran took us around where the body of Lokesh and all donated would be placed. The doctors are of the opinion that many celebrities have given written agreement while living and M.S. Ramaiah Medical college has 40 dead bodies in its stock for the dissection purpose.

Excerpts of an interview with Prof.R.N.Kulkarni:

We do not attach special importance as such. We appreciate the family for donating the body. For the medical students dissection purpose the body of Lokesh would be kept for four years and it might come up for dissection by 2008. His body is the 41st in our stock at the Anatomy department.

What is your code of conduct?

All are equal here. We do not attach special important to any celebrities. The main objective is that the students of medicine would know what is what from such bodies. For the expertise it would be useful. Like how you can search the jewel box in the cup board closing your eyes like that the students should know all parts of the body. This is possible only when human bodies are donated for dissection to Medical colleges.

In the four long years do you allow the kiths and kins to look at the body often?

Not often. Showing the body again and again is an insult to the departed soul we feel. As a matter of fact we take an undertaking and issue a certificate to the family for donating the body. Once the body is donated they would have to keep quiet. We can show once after it is kept in the water tank. There are cases of returning the body when it is identified. Normally we get the body of unidentified persons through police department help. My colleague Dr. Kiran has established very good contact in procuring the bodies to the college in his 20 plus years of service.

Do you inject medicine to the body to keep it intact for so many years?

After the body is donated it would be completely shaved. Then through the artery near the neck we inject medicine made out of five liters each of formalin and water, 1 liter of glycerin and one liter of salt. After injecting medicine the body will be dumped in water tank. We have 40 such bodies in the water tanks as of now at M.S.Ramaih Medical College. For the preparation of medicine and process to keep the body intact for years we incur Rs.2000. The medicine is injected only once. The body becomes stiff and it will not decompose. A slight 0.5 percent of discolor of the skin we could be noticed.

How many bodies you require for your college?

We require 12 bodies for medical students and two others for PG and BDS students.

With the Indian sentiments on the one side you get enough bodies?

We are not out of stock. We have enough as of now to meet the demand for the coming four years. In 1996 and 1997 we had more than 75 bodies. In case of short we exchange bodies between colleges.

When you get the bodies like how you got that of actor Lokesh is it possible to pick the important parts for transplantation?

For taking the eyes from the dead it has to be done within three hours for 100 percent usage of it. In the case of other parts after death before a few hours some important parts of the body could be taken for the benefit of others. According to the latest advancement in medicine even the skin could be taken away from dead bodies. It is now done in places like Pune and Mumbai. The bodies donated are beneficial for those who are living, for students of medical college and for research purposes.

There is a myth that human organs are diverted….

In case any one asks for return of the bodies…..

We would give back. There are 3 such cases in M.S.Ramaih Medical College.

Do you keep a list of celebrity bodies coming to the college?

We keep a list and also keep on changing the numbering system yearly. We have with us retired justice D.M. Chandrasekhar body. I had met him before the death in one of the functions and he voluntarily gave a letter to us to take his body after death. The late justice Chandrasekhar made inquiries in three correspondences on this donation.

This awareness of donation is not growing…..

Yes. The senior citizens Forum in Gandhi Bhavan in Malleswaram once invited me for a meeting on this donation. The discussion was very good. After that 10 to 12 persons volunteered. No one is coming here to earn extra status by doing so. A 78 year old Srinivasan who is unable to come inside the hospital due to ailment came in an auto the other day. He signed the letter of donation. An illiterate 80 years old woman signed the papers of donation. There are 60 volunteers list with us.

After the dissection by the students of Medical College how do you dispose it off?

After each and every part of body is dissected it would be dumped in one place and burnt in a far of place. Now it is happening at a far off place at Nelamangala.

In case the sentiment relatives ask for certain bones do you give?

Oh! That’s difficult. No such case has come up.