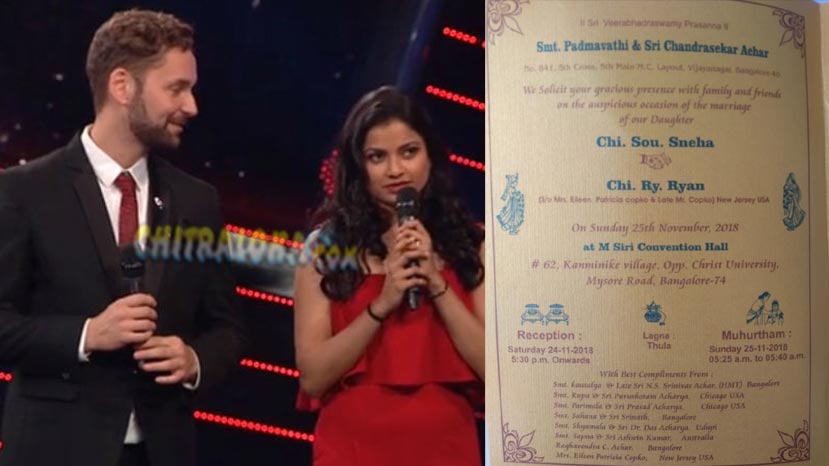 Sneha Acharya with her Fiance Ryan

Kannada film and television actress Sneha Acharya, one of the contestants in the ongoing sixth season of the Bigg Boss in Kannada hosted by Kiccha Sudeep, is tying the knot with her fiancé Ryan, on November 25.

Sneha, a trained dancer has featured in dance reality shows including hosting a few in Kannada television. She made her acting debut in Shivamani's directorial 'Josh’ and was last seen in Chetan's film 'Aake’ which starred Chiranjeevi Sarja, Sharmiela Mandre, and others.

She was accompanied by her fiancé before making entry into the ‘Bigg Boss’. While in conversation with Kiccha Sudeep, she had revealed about her marriage with Ryan in the near future, and had decided to contest in the show for the sake of its experience.

At present, she along with nine other contestants are facing elimination as they have been openly nominated by fellow contestants. Her fiancé Ryan, is based in New Jersey in the U.S.

The marriage of Sneha, daughter of Chandrasekar and Padmavathi, residents of Vijayanagar, is being held on November 25 while the reception will be on November 24, here in Bengaluru as per the Hindu customs.

Chitraloka wishes Sneha on the occasion of her marriage.