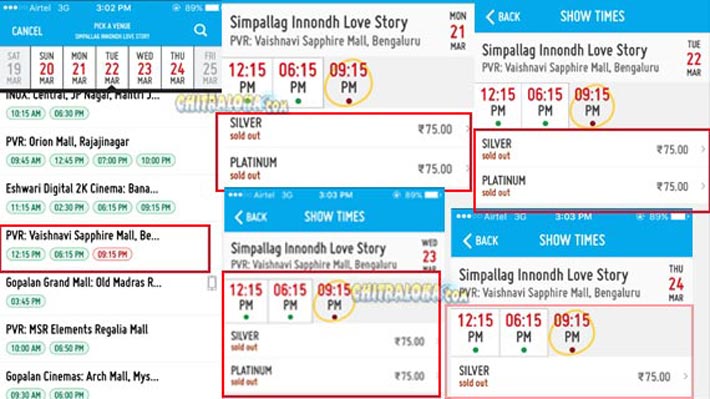 book my show showing sold out for sils

After the raging controversy over shows of Kannada films being wrong displayed as houseful turning away potential audience has surfaced again. Just weeks ago, films like Actor and Bhale Jodi faced the problem. Representatives of the multiplexes and ticket aggregators were called to the KFCC for a meeting and the issue seemed to be settled. But once agin, it is out in the open as another Kannada film, Suni directed Simpleag Innond Love Story (SILS) is facing a similar problem.

In the PVR multiplex in the Vaishnavi Sapphire Mall in Bengaluru, the 9.15 pm show tickets for today (Sunday) is available. But strangely, the same show for March 21, 22, 23 and 24th are all sold out! Nobody can book tickets when it is showing houseful. But in reality it is made to show as houseful. Then the film will be removed from this slot saying there are no audience! The same thing happened to other Kannada films last month.

After the issue become controversial with Kannada films being the target, promises were made that it would not happen again. Technical glitches were also blamed. But Kannada film makers are certain that it is a ploy by some exhibitors to deliberately force out Kannada films from multiplex screens. SILS opened last week to good reviews and was picking up at the box office. It had mostly newcomers and Suni was the only big name. Multiplexes had agreed that Kannada films need some time to pick up and should not be removed within two weeks. But now once again a good Kannada film is facing a problem from unknonw hands.

Actor Back in Multiplexes