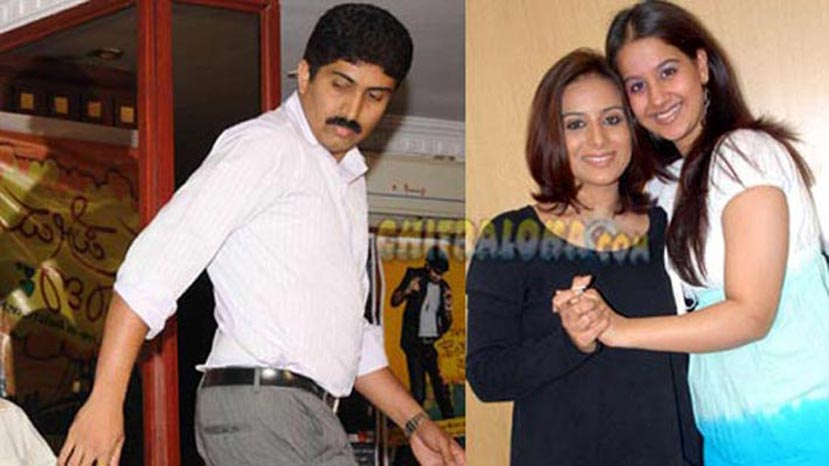 Prasad Salumara, the producer of 'Hosa Prema Purana’ starring Nithin, Radhika Gandhi, Shradda Das and Pooja Gandhi was in a hostile mood on Monday when he addressed a press meet to announce about the release of his first film on November 30.

His anger was justified.  He had put in nearly Rs. 1.5 croes for the film and the rilm's Satellite rights had not been sold because the channels were refusing to purchase the films of not so popular stars.

And when he was attempting to release the film by getting some theatres, the artists in the film were not willing to promote the film.

"What should I do in this situation. Please tell me' Prasad Salumara asked the media and charged that Pooja Gandhi who had demanded a huge remuneration for her guest role was not willing to promote the film.

She also conspired to prevent her sister Radhika Gandhi from attending the press meet.

"I dont know why the Gandhi sisters are behaving like this.  I have honoured my commitments fully.  But still  they do not want to promote the film.  I dont expect such lack of professionalism in artists like Pooja Gandhi and Radhika Gandhi' charged Prasad and he walked out of the press meet he himself had organised.  Obviously the pressure and stress of the release along with the non co-operative attitude of the Gandhi sisters was too much for him to handle.

However the film's other heorine who is doing a major role in the film Shradhdha Das arrived from Mumbai for the press meet. She was more than willing to share some of her thoughts with some jouranlists even after the press meet.

Later the lead actor of the film Nithin said that Pooja Gandhi had demanded to see the film before she was to take a decision as to whether participate in the promotion of the film or not.  Nithin showed evidence of number of messages he had sent to Radhika Gandhi virtually pleading for her presence in the press meet along with her sister. But Radhika Gandhi did not have the courtesy of replying the messages many a times, but one message she just answered  that Pooja Gandhi's phone number can not be given as per her sister's strict instructions.

Director Shivakumar said that the film is on the issue of Live in Relationship which is gaining ground these days.  He said that he had argued in the film that a marriage will be stable only when the couple understand the concept of ups and downs of live.

Actor Nithin and director Shivakumar says they have invited Radhika Gandhi properly and even showed a number of messages to strengthen their argument.