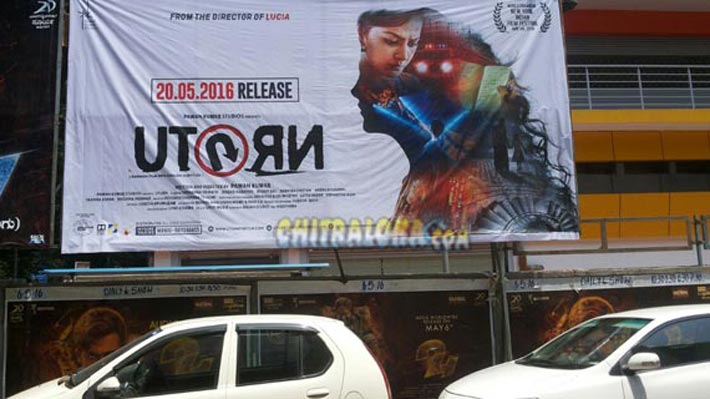 U turn hoarding at bhoomika

Director Pawan Kumar movie U Turn is getting ready for the release on 20th May and had made all arrangements to release in Bhoomika as the main theater. Movie is distributed by Jack Manju under the banner Mysore Talkies. 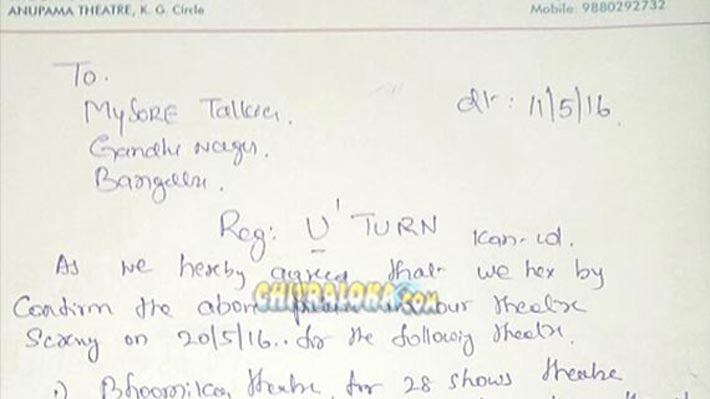 On 11/5/2016 M/s Mysore Talkies had made an agreement with Bhoomika theater Gnaneshwar Aithal. Once the theater was confirmed Manju had placed a hoardings at Bhoomika and started giving paper publicity.

All of a sudden on 13th evening Gnaneshwar Aithal sends message to Manju mobile. Following are the msgs exchanged between Aithal and Manju

We r unable  to screen ur picture u turn  in our bhoomika theatre  on 20.05.2016. We  hereby cancel  our letter of arrangement with  you  regarding  u turn  picture. Please  screen it some  other theatre  in KG rd. We apologise  for inconvenience caused  to  you.

Sir you have given an agreement of screening our film u turn in your theatre Boomika on 20th of May.....your sms of inconvenience for not screening is shocking.....Dayavittu ondu kannada cinimavannu kadeganisi kollabedi.....nimma agreement ge bele (value) kodi.....

Sorry sir. We had given an agreement  one month back given 30 lacks advance amount for that pictures we have  to recover  our money.please make me way to collect  our advance amount. Navigation yavatthu kannada cinema vannu kadeganisi kolluvudilla. We will make arrangements for  ur picture in some other  theatre. Namma advace amount recovery  madikollodakke daari maadi kodi. Thanks. 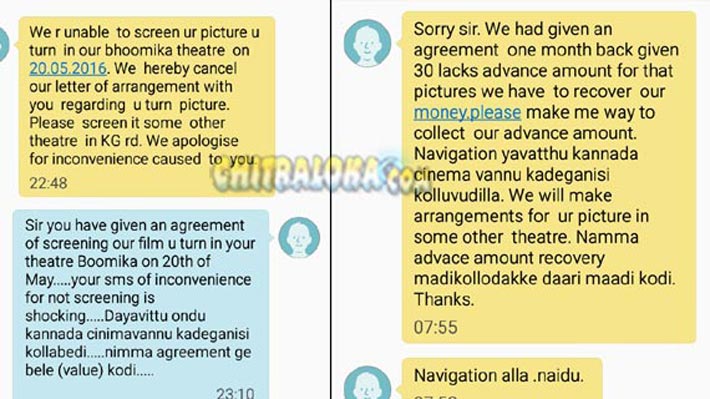 According the Manju `Aithal wants to run Mahesh Babu's Telugu movie Bramhotsavam in Bhoomika. Because of this they want to remove our U Turn movie and make way for Telugu movie. Bengaluru KG Road theaters are run by Kannada persons only. When Aithal had paid advance one month back then why did he make agreement with us. At any cost we wont leave this theater since we have already made enough of publicity. More over Aithal is not screening any other Kannada movie but making way for Telugu Movie which cannot be tolerated.

Bengaluru KG road theaters is known for Kannada Movies. Now the fate of a Kannada movie here is  fight for a theater in KG road with other language movies run by Kannadigas!