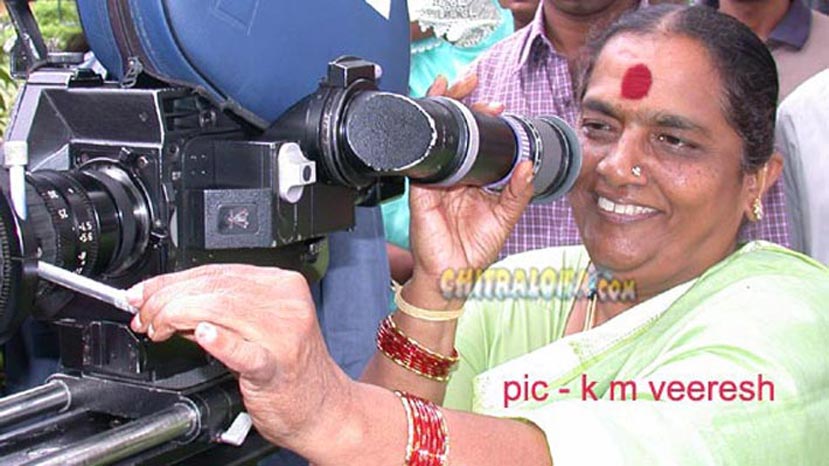 You know how much of affections the children will be having for their father? That is why the adage goes 'like father like son'. If the father is a torchbearer the sons follow suit. Even in the miniscule issue we can know it.

Raghu was always dressing like Dr.Rajkumar. He was always with full shirt and pant of Dr.Raj taste. When ten shirts were stitched for Dr.Rajkumar at least five should be for him. He was getting angry when it was done like that. Why only papa should wear so many pants, why not for me he was questioning.

All the clothes were stitched by Emnath and when his assistant Chandru was stitching the children were not happy.

Dr. RajkumarDr.Raj had aversion to some kind of shirts. It should be skin tight in stitching. He was not happy with ready made shirts. When he was in the house he was not particular about shirts. For shooting it should be according to his taste.

Dr.Raj had liking for bell bottom thin quality pants. When the social films was about to start I was traveling various places to get different color and quality pants. I was in charge of his costume selection. Then only he was very happy.

When the tailor did not stitch it according to his taste he was not yelling on him. He was complaining to me. When the stitching was bad for the second time he was not saying anything. Whether I have changed in my physique or his stitching was not good he was wondering. What defect I have he was analyzing first. Then we should tell the mistake of others he was telling always.

The costume was not that expensive. It was not that difficult to get his approval. He was as anxious as a director in his costumes.

There was bit argument when his costume was not according to his taste. Don't you agree the roles sometimes you are not interested? Like that you have to adjust I was analyzing. Then he was ready to wear such costumes. The costumes of those days shown to present day boys they do not show any interest. We are not Rajkumar, he had such powerful physique. We don't have and we can't wear was the answer when they were forced to wear his costume.

In the case of dance when I tell the children you all dance well they were of the opinion that daddy had good expressions and we manage it with dance. It is impossible to give impressions of his caliber is the collective opinion.

That is true. When the song was on the screen Dr.Rajkumar should be there. Otherwise the audience would get up and go. Even when the heroine is singing Dr.Raj was compulsory on the screen. The song was very clear and understandable. Now it is not like that. There is lot of sound. The expressions were disclosed via songs.

The fighting in Dr.Rajkumar films was also special. Shivaiah was the lone fight artiste of Dr.Raj films. Each one was directed differently. There was graph written from beginning to end. Now each fight sequence is designed differently. The neat flow is missing.

Looking at Gandhada Gudi fights Shivanna and Puneeth still today appreciate. How was it possible to do such wonderful fights? He never said no to anything. For very tough fights of Shivaiah there was no from him. He was telling Shivaiah to do all kinds of stunts we have to do otherwise producer get angry and looking at me because I was the producer of some his films. It is not easy to get Gandhada Gudi type of fights and there is no such fight composer.

In dance sequence he never said no to anything. From the beginning Udupi Jayaram was his dance director. There was a complaint that it is monotonous dance. In one film we opted for a different dance director. But Dr.Raj underwent difficulty from it. But he never complained about his steps.

In Mohini Basmasura he did Bharatanatyam. He was collecting sweat while practicing. Then only he was ordering for take. He was not complaining that so and so is difficult. We should have confidence in one what he was observing.

Even today I remember the Gandhada Gudi sequence I get shiver. I will write about it in the next week.