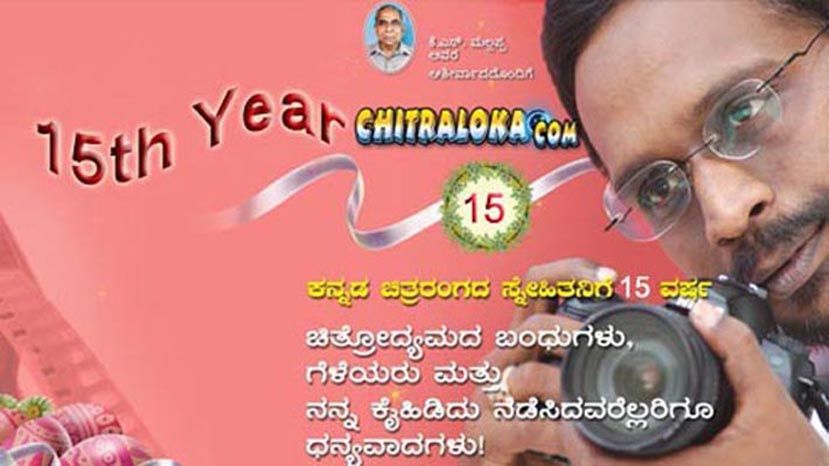 A decade and half ago, not just India, but the entire world was witnessing what was called the 'dot com bubble.' The Internet was just becoming a common word but which did not affect or reach most people. Most websites were dying when the 'bubble' burst! But as they say phoenix rises from the ashes. When there were hardly any websites about Kannada, was born the first exclusive Kannada film website: Chitraloka.Com!

Film news back then was confined to the Friday supplements of newspapers. It was still a big deal that a popular Kannada film was being telecast on TV. There were no FM stations playing Kannada film songs all through the day. There were no daily TV programmes about films. But the people and audience had appetite for Kannada film news.

Chitraloka forged the bold new path in this direction. Film news was no longer confined to a Friday supplement. Film stars, film technicians, their photographs, film stills, and everything else related to Kannada films became accessible 24/7. In the last 14 years Chitraloka.Com has stayed ahead of the cutting edge of online technology to provide Kannada audience with the news of Sandalwood. Apart from that Chitraloka took many other steps to promote Kannada films. With the help of Internet technology Kannada film news as well as promotion of Kannada films were enabled overseas. Distribution of Kannada films abroad was facilitated by Chitraloka at a time when it was unheard of.

Chitraloka did not just become the one-stop site for Kannada film news but also spread the idea of online promotion of films by setting up individual micro-sites for hundreds of Kannada films.

Stepping into our 15th year, we are proud to announce the launch of Chitraloka.com App, which will be available within the next few days. It has been a journey that has created records (Chitraloka.com is winner of two Limca Book of Indian Records), made Sandalwood proud and brought the Kannada film audience ever so closer to the film and film personalities they love. Chitraloka is proud of being part this endeavour. What we can promise now is that the future is even more exciting!

Thank you, the Kannada movie fan for this journey together and let's take one more step in the 15th year!