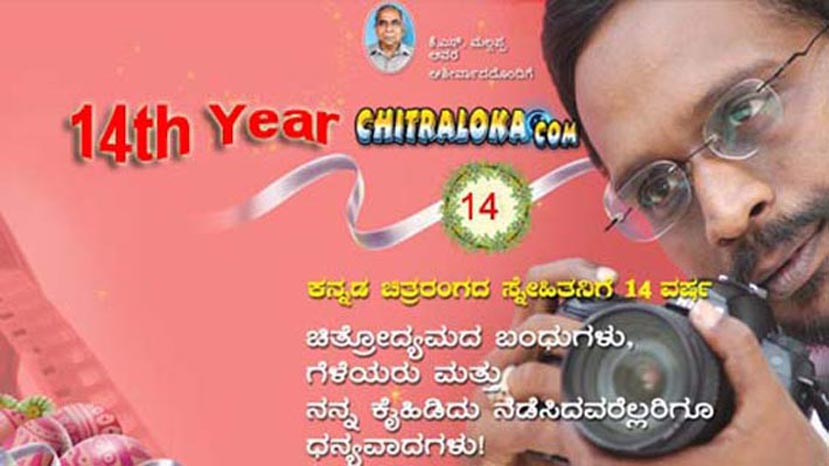 June 26 marks another milestone for Chitraloka.com, as it enters the 14th year of its existence in the service of the Kannada film industry. It was on this day in 2000 that Chitraloka was launched. It was the peak of the dot com bubble burst and the Y2K world problem.

Very few in the Kannada film industry knew about Internet and publicity or reaching out to audience through websites was not heard of. But there were a large number of Kannadigas inside India and outside whose need for Kannada film news was unsatisfied. Chitraloka became their gateway.

Chitraloka was the first website completely dedicated to news about Kannada films. In a short span, we became a top website with high ranking not just in Karnataka but across the world. Chitraloka has become the location for the largest number of Kannada film photographs and has been twice mentioned in the Limca Book of Records.

In the last 13 years Chitraloka has become a one-stop-shop for fans of Kannada films to learn about the latest breaking news, developments, star interviews, film reviews and much more. We have constantly managed to provide fans all film news first, accurately and comprehensively. Not surprisingly, we are the first stop for all film makers, actors and technicians.

We have continued to provide positive support to the industry and partake in its growth and development. Chitraloka organised the Ambi Bimba photo exhibition last year to celebrate the 60th birthday of Ambareesh. It was inaugurated by the then chief minister and the exhibition had nearly 700 rare photos from the life of Anbareesh.

Thanking all our readers, advertisers and friends in the industry, we reaffirm the commitment to the industry in the years to come.

This email address is being protected from spambots. You need JavaScript enabled to view it.