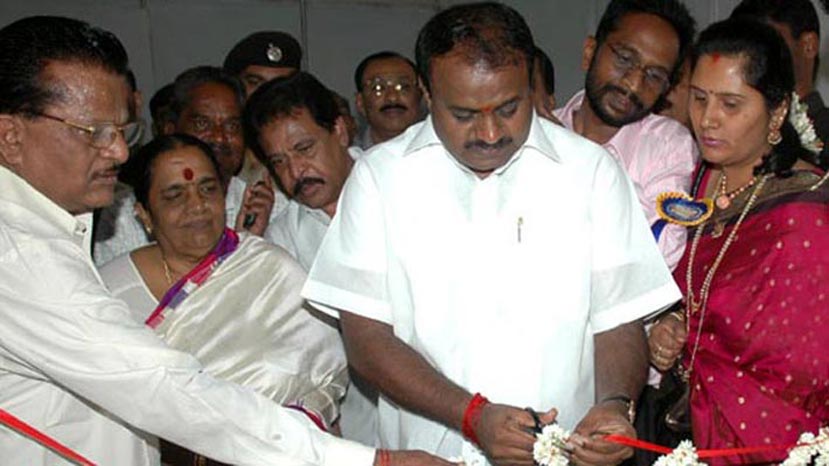 The week long exhibition of Kannada film stills from 1934 to August 11 2006 has come to an end on 20th of August. The Kannada filmdom and the general public sought the extension of this exhibition. This speaks about the success of this memorable exhibition. The extension of the exhibition further was not possible because the panels brought for this occasion by art director of national repute Shashidhar Adapa were booked for next week to a function in Mysore.

The similar exhibition of Chitraloka's 'Chitraloka' would come up in Mysore during the Dasara festival time. The Karnataka Government has evinced interest in this show.

We give you some of the highlights of the one week Chitraloka mega portal exhibition on Chitraloka.

The Karnataka Chief Minister H.D.Kumaraswamy came in advance to the program on 14th of August. This is perhaps for the first time in his regime as CM. He spent half an hour in this exhibition. The bigwigs of the Karnataka film industry were present at this precious time.

20 persons worked for pasting of the 2600 photographs. In the morning there were six and in the evening there were two security personnel at this exhibition venue of KFCC.

Two photographs were stolen from the exhibition.

The general public showed their exemplary manners. The photographs not tucked properly or fallen down were adjusted by them at the proper place.

On an average from day two of the exhibition 8000 people saw this exhibition from 9 am till 7 pm. Over 50000 people walked in to the first floor of KFCC and each one of them spent more than two and half an hour. The time they spent was like watching a film. But it was film stills of all the films was the beauty of this exhibition.

CD's of this exhibition photographs were sold by Anand Audio on the spot.

The main sponsor Rejoyz Digital Auditorium displayed the visuals of the digital auditorium at the entrance of the first floor.

Senior actress Leelavathi came in fever to see this exhibition. When she saw all the photographs she replied that her fever has gone. That is the happiness she got from this exhibition.

Actress Leelavathi son Vinodraj described that the wish of my mother is to collect all the photographs of her films in life. I could not do it. You have done it Mr Veeresh he complimented.

People from Mysore to Bagalkot came to take a look at this exhibition.

Amaranath Gowda of AKKA, USA was one of the notable visitors to this exhibition.

It was not a joke but a serious matter – the elderly people who came here said a wheel chair to take a look at all the photographs is needed. Three hours of standing is a tough task for senior citizens they felt.

The general public had no chance to visit the Karnataka Film Chamber of Commerce. This was an occasion for them.